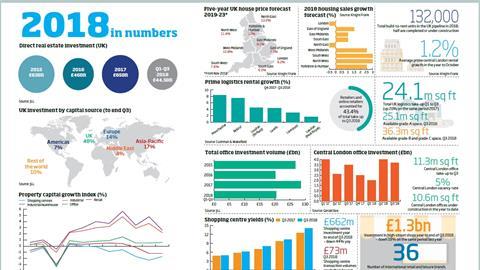 The fourth quarter of the year is usually the most active, as buyers and sellers scramble to close deals by the year end, but this year investment volumes are expected to be dragged down by the uncertainty surrounding Brexit.

Alistair Meadows, head of UK capital markets at JLL, predicts investment volumes will be between £10bn and £15bn in Q4 – compared with £20.9bn in Q4 2017. “We’re definitely seeing heightened levels of cautiousness among certain investors as we close Q4,” he says. “That is natural given the heightened political uncertainty and environment.”

However, Meadows expects that even with a slower Q4, total investment volumes will be in the mid- to late-£50bn range, which slightly exceeds JLL’s forecast of £55bn at the start of the year, although it is down on last year’s figure of £64.7bn. 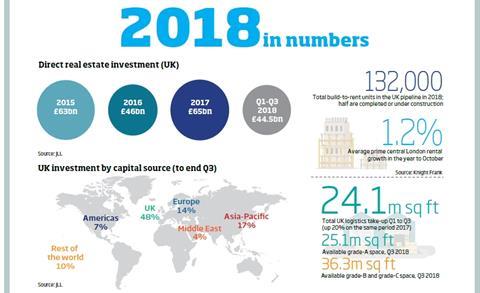 Retail has been hit particularly hard in 2018. In the third quarter, shopping centre deal volumes fell to £73m, the lowest level on record, according to Savills. “Prior to this quarter, the previous low was £79m in Q4 1995, underlining the extent to which the market is experiencing an unprecedented lack of liquidity,” says Savills’ Q3 UK Shopping Centre report.

The industrial and logistics sector has, on the other hand, outperformed the wider market. Total logistics take-up hit 24.1m sq ft in the first three quarters of the year, 20% up on the same period in 2017. “There is evidence of pent-up demand for high-quality distribution space and rising speculative development will help boost take-up levels, with leasing volumes on track to exceed their five-year average of 30.4m sq ft this year,” says Bruno Berretta, UK logistics researcher at C&W.

Appetite for office space has remained resilient and the sector has performed strongly, says Meadows, thanks to very low vacancy levels, constrained supply and consistent demand – particularly in relation to the London tech, media and telecommunication sectors.

Student accommodation, build-to-rent, retirement living and healthcare are set for growth, says Meadows: “We see a build-up in demand from investors to gain exposure to these sectors. We’re likely to see greater demand for alternative sectors.”

But he adds: “It’s likely, given the political milestones around Brexit, that we may see a continued slowdown in investment activity into Q1.”