Nick Searl and Robert Evans, Argent’s joint managing partners and Partners of Argent Related spoke to Blackstock Consulting’s founder Andrew Teacher in the latest episode of BossCast, where the leading figures in global real estate and proptech come to be grilled and share insight from their time at the top table. 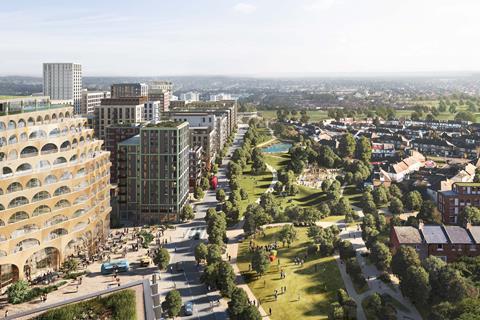 Like a classic band such as the Eagles or R.E.M., Argent has a classic song that everyone knows it by: King’s Cross - AKA the largest mixed-use development in single ownership to be developed in central London for over 150 years. The duo discuss how the project is now coming into maturity and speak openly about weathering the pandemic.

“It was a tough period, but we worked closely with our occupiers, and those relationships were strengthened,” Robert Evans explains. “We’ve been able to focus more on what makes King’s Cross special. Compared to the original master planning documents, the place is even better than we dared hope, thanks to luck, judgement and tenacious effort.”

Nick Searl, who leads the firm’s latest flagship development - the 10 million sq ft Brent Cross Town project - reflects how success comes from who you bring to the party. “King’s Cross takes away the fear of taking on a challenge like Brent Cross,” he says. “You realise that you’re not really ‘master planners’. The real success comes when you partner with others and they start to influence things.”

The principle of collaboration clearly guides the pair’s oversight of the company. “We focus on curation rather than control,” Evans muses. “I wouldn’t let developers choose public art on their own,” he jokes, diplomatically.

As the commercial real estate sector shifts its gaze towards life sciences, labs and healthcare, it’s timely that Argent and its partners within the King’s Cross Central Limited Partnership are now in the process of developing the five-acre St Pancras Hospital site across the canal from King’s Cross. The redevelopment will sit alongside new facilities for Moorfields Eye Hospital and others as part of Project Oriel, in the centre of the King’s Cross Knowledge Quarter. “It’s also 12 minutes on the Thameslink from St. Pancras to the Brent Cross West station where Argent Related is building Brent Cross Town,” Searl says. “That will be a really convenient commute to the Knowledge Quarter.”

And with both Cambridge and Oxford both easily accessible by road and rail, it could potentially create some exciting hub and spoke opportunities for occupiers - and residents - put off by the sky-rocketing rents and lack of supply that is hampering the expansion of Cambridge and Oxford themselves.

For Searl, evolving new places for modern audiences means talking less about buildings and more about values. “In Brent Cross Town, that means delivering on pledges around sport and play, building a flourishing town, reaching net zero by 2030 at the latest and creating new connections,” he explains. “We are creating our own Flourishing Index that will establish quantitative and qualitative benchmarks against which we can measure success and improve as we go along.”

It’s obvious that ESG concerns are more than a box-ticking exercise for Searl and Evans. “In King’s Cross we run an energy company and a primary school,” says Evans. “That gives us a completely different window into the community and how we can help people.”

Argent Related has taken a similarly ambitious approach to Brent Cross. “It’s called Brent Cross Town for a reason,” Searl says. “It brings all of the components of a town into one place.” This includes 50 acres of green parks and playing fields, one of the development’s key selling points.

And the approach has paid dividends. “We’ve proven that focusing on ESG values has actually created monetary as well as social value,” Searl notes. “Office square foot rents and the sales price of apartments have increased. There’s a direct correlation.”

It’s certainly helped to move the dial within the wider industry. “Most major international investors will want to hear a really powerful ESG story – and a genuine one,” Searl says.

Environmental sustainability is not just a crucial part of the narrative but of delivery. “The industry’s been aiming at the wrong target for a long time,” Searl explains. “We’ve all been focused on operational carbon, when embodied carbon is more like 60 percent of the pie.”

Many of these values boil down to the principle of stewardship – taking a long-term view on the responsible management of the built environment. “Stewardship is about giving the place a real personality, so that people have pride in it, want to be part of it, and spend time there,” Evans clarifies. “We’ve done a perception study every year on King’s Cross, and our Flourishing Index at Brent Cross Town will go a step further. You can measure the real beneficial impact using qualitative and quantitative measures.”

Weighing in on the frequently-discussed future of the office, Evans and Searl don’t seem phased. Evans explains, “We were already focused on the fundamentals – somewhere that’s easy to get to by public transport, walking and cycling, in a place with personality, where there are lots of great things going on, and that’s a force for good for the environment and the community. In the war for talent, that’s the narrative that will attract the right people.”

Despite the net benefits Argent’s regeneration schemes have brought, the pair are keen to stay out of the limelight. “As a developer you’ve got to be prepared to be the steward from the back seat,” Searl maintains. “It’s tempting to put your brand everywhere and tell everyone what you did, but no member of the public wants to be in a developer’s back yard. They want to be in a great neighbourhood and feel that it belongs to them.”