Contractors are not passing on rising construction costs to developers because of the uncertainty surrounding Brexit negotiations, according to the latest Savills Programme and Cost Sentiment Survey (SPECS).

“Despite a steady rise in the cost of materials such as steel and cladding, contractors are continuing to absorb costs rather than passing them on to the customer,” says Simon Collett, head of building and project consultancy at Savills.

“For this reason, tender price inflation remains stable as contractors strive to fill up their order books ahead of Brexit, assuming that both developers and occupiers will be less willing to commit to new projects as we head into the unknown.” 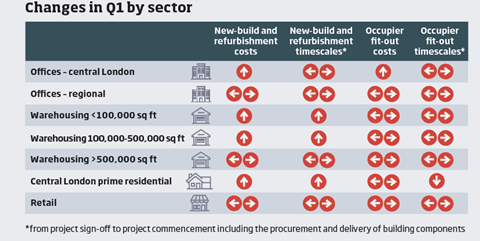 Timescales are being driven down by the boom in build-to-suit and speculative logistics and industrial development. Strong demand from developers is putting contractors under growing pressure to finish projects on time. This is particularly true for small to mid-box schemes, according to Savills.

It is a similar story for residential property, but in the office and logistics markets, where development is more muted, pressure on timescales is less pronounced.

Collett says it is hard to predict the outlook for development costs and timescales, even for the remainder of this year.

“Ultimately, 2018 is set to be an interesting year for the construction industry as we continue to come up against a number of external factors, such as pending US steel tariffs and Brexit,” he adds. “These factors will undoubtedly influence costs into 2019 and beyond, but what this will look like in practice remains to be seen.”