Paul Buddin and Matt Evans from TopHat, alongside Jo Cowen, founder of Jo Cowen Architects, sat down with Blackstock Consulting’s Andrew Teacher in the latest episode of PropCast to discuss the future of the UK’s housing, particularly the growing contribution of modern methods of construction (MMC). 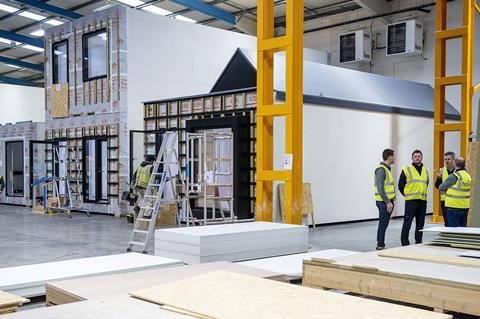 In the 12 month period between 2019 and 2020, more homes were delivered in any year since 1987, with 243,770 completions recorded by the Office for National Statistics. However, the housebuilding sector is still some way off meeting the Government’s 300,000-new-homes-a-year target.

A lack of innovation in the sector has seen productivity levels stall, as the country’s largest builders and developers refuse to give up on old ways in favour of more cost and time efficient methods.

In contrast, sectors such as automotive and aviation have taken off (in the latter’s case quite literally) to develop technologies that have driven efficiencies over the last couple of decades.

Building on Buddin’s experience gained during his time as CFO of supercar maker McLaren Group, and Evans’ time working for Airbus, the trio discussed the construction industry’s answer to the ultra-modern, technology-driven manufacturing processes seen in the automotive and aviation industries: MMC.

For Matt Evans, chief technology officer at TopHat, a leading UK designer, supplier and producer of modular housing, MMC is all part of “figuring out how we can build more housing, how we can make it more sustainable, and how in the end we can also make for beautiful homes and communities.”

The housebuilding industry seems to be slowly catching up, with MMC steadily expanding its reach in the past decade. Jo Cowen, whose Chelsea-based architecture studio is working with TopHat on bespoke products for several developers, pointed to the number of traditional housebuilders increasingly looking to modular as an emerging opportunity.

“If you look at what Berkeley’s done, they are traditional housebuilders, and they are also developing huge amounts of modular. If you look at Legal & General, they have always traditionally built as housebuilders and now they, over the last few years, have set up their own factories to become offsite manufacturers too.”

With the rate of retirement poised to speed up in the coming years and an exodus of workers from the European Union resulting in builders vying for talent, one can not simply overlook the impact staff shortages are having on the sector’s productivity rates.

Speaking about the skills shortage in the construction industry, Paul Buddin, TopHat’s chief financial officer, argued that this was not a concern for modular housing. “This is where we have an advantage because you don’t necessarily need to be in a trade to build a house in a factory. We can bring people in from other manufacturing sectors, and we can bring people in straight out of school and train them up.”

In terms of challenges, Buddin, who only recently made the move to TopHat after working for McLaren Group for over a decade, suggested a need to mature the housing supply chain for just-in-time manufacturing. “We’ve got to work on getting the materials we need in the factory at the right time, on the right days. We can’t have a radiator or a window five days late to our factory. You can cope with that on a building site, you can’t cope with that in a factory.”

Cowen also pointed to the need to scale-up the capacity in MMC. “At the moment, I can’t see it being much more than 3,000-4,000 homes a year across all the manufacturers. I think that scaling up is going to be really pivotal, and the opportunity it has for economic benefits locally, what it does for the job market, and what it does to encourage people from every walk of life to come into manufacturing where they may not have done so.”

Asked about whether the future of housing was looking more towards the rental market, Cowen suggested that “for-sale is always going to be key in this country and historically, owning your own home was critical. But people want the flexibility, and we can see the build-to-rent single-family asset class growing exponentially”, which, she pointed out, is well-suited to the MMC market.

All were keen to acknowledge MMC’s environmental credentials which, as Cowen suggests, have become increasingly important to consumers in the past few years. ESG could be the perfect storm the MMC arena is waiting for.

Not only is TopHat a pioneer in the 3D printing of bricks, helping to reduce masonry’s traditionally high carbon emissions, but all 38 of its homes manufactured for Urban & Civic’s development on The Slivers in Rugby are, according to Evans, “close to zero embodied carbon. That means those homes are going in the ground with almost no carbon dioxide emissions from our manufacturing, from our supply chain, or from the materials.”

But as Cowen suggests, sustainability as an architect is “not just delivering zero carbon on the day. It is how we are going to help promote people living more sustainably. It’s the operational net zero that we’re really, really keen on.”

Evans, who until last year was vice president for digital transformation at Airbus, stressed the importance of digital twin technology to ensure modular homes can be upgraded to meet continually evolving environmental standards. This technology, he explained, “is a package of information about how the house is built. The engineering, the stress, the assembly, anything that happened from a supplier or from our own factory.” He continued, “if you go in ten years later and need to come up with an even more energy efficient appliance or electrical system, you want the record of exactly how the house was built without having to poke through six different walls trying to find the thing you need to replace.”

#104 Innovation in construction will require a joint effort from the public and private sectors, says Homes England and Modulous