Exclusive research undertaken for Property Week by data provider Search Acumen has revealed the true scale of university land ownership – and the extent to which Oxford and Cambridge stand head and shoulders above the rest. 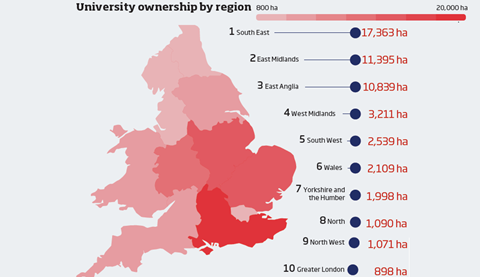 Universities in England and Wales own more than 52,000 ha of property and developable land between them.

Oxford and Cambridge universities are by far the largest landowners, holding a combined 41,580 acres, almost 80% of all university-owned land.

“As the institutions are centuries old, this property is likely to have been amassed over time through a number of means, ranging from payments, gifting, inheritance and as forms of investment,” says Andrew Lloyd, managing director of Search Acumen, which used Land Registry ownership data to compile the report.

Many of the other universities with significant land holdings have a strong agricultural focus, such as Aberystwyth, the University of Reading, Harper Adams University and Bangor University, where land is partly used to serve their agricultural and environmental colleges.

A third of all university land is held in the South East, followed by the East Midlands (22%) and East Anglia (21%) – largely due to the presence of Cambridge and Oxford universities in these areas.

With just 897 ha – equivalent to 1.7% of the total – Greater London is the region with the smallest proportion of land owned by universities. Lloyd anticipates that university land ownership could increase in the future due to the projected rise in student numbers.

“As student populations continue to grow in the UK, it is feasible that we will start to see a land grab, as universities look to expand and accommodate more and more students,” Lloyd says.