Woolworths stores empty a decade on

When Woolworths fell into administration in December 2008, it sent shockwaves through high streets across the country. 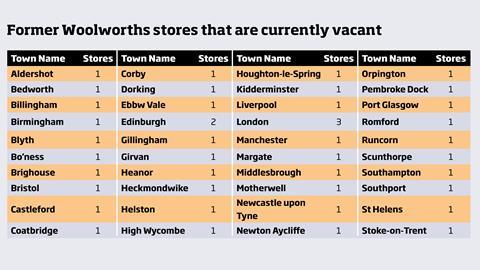 Ten years on from the collapse, the loss is still being felt. Around 5% – or 43 stores – from the former Woolworths estate, which prior to its collapse boasted 807 stores, currently lie vacant, according to research from the Local Data Company (LDC).

Scotland has the highest number of empty former Woolworths units, at seven, closely followed by the North East and the South East.

Ronald Nyakairu, senior insight analyst at the LDC, says there are a number of reasons these stores have not attracted occupiers. “Some of these units have failed to get new tenants as the towns they are located in already had a large number of vacant units – for example Margate and Kidderminster – or are too small to attract an occupier that would be willing to take such a large unit in a town,” he says.

“Other units have been reoccupied since Woolworths closed, but have since seen these occupiers close, such as Home Bargains in Liverpool, or go into administration, such as Poundworld in Bristol. Or they simply close the store as large-scale retailers look to take up smaller units due to the growth of online offering an alternative channel for consumers.”

Many Woolworths stores were snapped up in the initial wake of the retailer’s collapse. In 2009, Property Week reported CBRE figures showing that close to 60% of stores were let or under offer – Iceland took more than 50 units in one deal alone.

By 2012, vacancy levels had fallen to just 13%, according to LDC figures. Six years ago, 38% of the remaining empty Woolworths stores were in Northern Ireland, 26% were in the North East of England and 19% were in Scotland.

The majority (75%) of stores that have found new tenants have been retained for retail use, while others have being converted into pubs, bars, clubs and restaurants.

It is difficult to predict whether the 43 remaining Woolworths stores will be let, but LDC says there are more multiple retail chains around today than five years ago, which should – in theory at least – increase the chances of landlords finding occupiers.