While the aviation and automotive industries may hog all the headlines when it comes to the climate crisis, it’s actually buildings that contribute the greatest proportion of the world’s carbon emissions – some 40 percent, according to the United Nations Environment Programme.

It’s a problem that Anthony Baker, whose company Satellite Vu is launching a constellation of satellites to measure the heat emissions of any building in the world, knows well. The satellites are fitted with an advanced thermal imaging camera which can detect the temperature – and therefore the energy performance – of any building on the planet.

“We can tell you where the energy is being wasted in the world,” explains Baker.

Unsurprisingly, the firm has caught the attention of some of the biggest investors in technology and real estate.

Most recently, Satellite Vu raised £20 million from investors Lockheed Martin, its third fundraise in as little as ten months. Seraphim Space Investment Trust, Draper Esprit and Ridgeline Ventures joined the Series A late last year. Its satellites are being brought to space aboard one of Elon Musk’s Falcon 9 rockets – which Baker jokingly refers to as a “bus service.” And Europe’s largest proptech VC, A/O PropTech, has invested in both Satellite Vu’s seed round and its Series A.

A/O PropTech’s founder Gregory Dewerpe saw the technology’s potential from an early stage, commenting: “Reaching our net-zero goals globally will only be possible if we successfully decarbonise real estate. Satellite Vu’s accurate, real-time measurement can become the single source of truth when it comes to calculating, benchmarking and reducing buildings emissions, and show us exactly where to prioritise.” 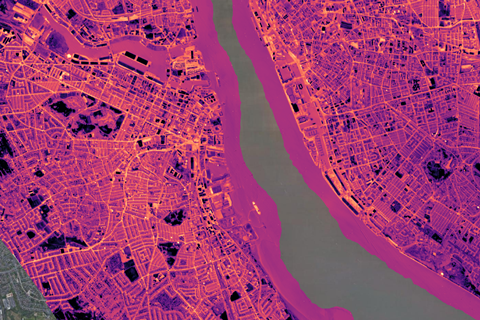 The partnership has proved extremely fruitful. “I’m a space guy,” Baker remarks. “The other founders [of Satellite Vu] are tech guys – so to have an investor like A/O PropTech that knows real estate inside-out, that can make the introductions, teach you the lingo, and identify what’s important is crucial.”

The investments have brought Satellite Vu into A/O PropTech’s burgeoning family of companies that can measure, report, and ultimately decarbonise the world’s largest and most polluting asset class. Its most recent investment, Climate X, quantifies companies’ exposure to climate risk – a task that is now a legal imperative for listed companies and large financial institutions with the upcoming rule changes on climate-related financial disclosures in the UK. The company’s seed round raised £4.2 million, led by A/O PropTech.

The VC firm also counts Span, a manufacturer of smart home electric panels headed by a founder of Nest, and PassiveLogic, a US Department of Energy-backed building control automation platform among its other climate-focused investments. The companies raised $90 million and $34 million respectively in Series B funding rounds this year.

This interplay between government, technology and the built environment is where Jessica Williamson comes in. As proptech lead at DLUHC, she seeks out innovative firms that can help support the department’s objectives, particularly when it comes to delivering social value.

The planning process – slow, unwieldy, and usually only featuring the voices of retirees – has long been a sticking point when it comes to genuine democracy in the decision-making process of what gets built. Williamson is looking to change this by connecting local government with a range of new digital tools.

“They make it more possible for people to have a voice and get involved,” Williamson remarks. “If you tell people to show up at a town hall at two o’clock on a Tuesday, they’re unlikely to come. If something catches your eye on social media, you can shape a new development in your neighbourhood.”

A transplant from California who has lived in the UK for fifteen years – and not lost a drop of her West Coast accent – Williamson spent years working in startups and accelerator programmes up and down the UK before putting her experience to use working for a government department not best known for working with technology.

The role of DLUHC proptech strategist was newly created for Williamson in 2019, signalling the department’s willingness to engage with digital tools after decades of hesitancy – a move that think tanks and policy wonks have long called for, such as the calls for digital planning in Blackstock Consulting’s Radical Regeneration Manifesto and Radical Capital Manifesto.

“I advise central government on what’s going well in the proptech space, what isn’t going well, and what it can do to help,” Williamson says, summarising her role.

But many of these companies in fact end up helping the government. Illustrating this point, Williamson continues: “Companies like LandTech, Urban Intelligence, REalyse, or Nimbus Maps do a much better job of helping the public sector understand the development potential of land.”

Ultimately, the interplay between scale-ups like Satellite Vu and large government departments is greater than one might think. “There’s tons of data and insight that these companies like Satellite Vu have that the public sector could benefit from – either as a potential customer or to inform policy,” Williamson notes.

Baker agrees, striking a note of optimism: “We can be enablers, we can be signposts to the problems – so that people can address them.”