Annual UK house price growth peaked at 13.4% in June 2021, according to Nationwide. Growth at this pace is unusual. Doing so in the aftermath of a pandemic is nothing short of remarkable.

Changing working patterns encouraged employees to venture further from the office, exchanging a study and a garden for a longer commute while the popularity of puppies and Pelotons further drove the push for space. A stamp duty holiday was just the icing on the cake. With such strong incentives to move, transactions breached 1.5 million for the first time since February 2008.

Some of that momentum will carry through into next year. With limited stock left available to buy, transactions will likely slow but pressure on price growth will remain. 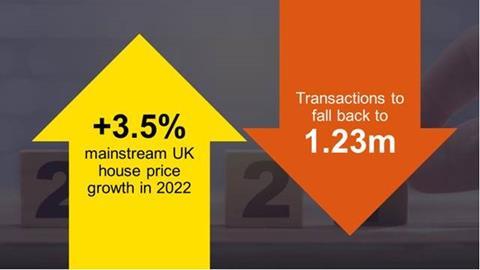 As Warren Buffett puts it, “only when the tide goes out do you discover who’s been swimming naked.”

Since 2014, Mortgage Market Review has limited how much banks can lend and to whom. For years, the 3% affordability stress test has felt like an irrelevance. Now, as markets price in at least two base rate rises next year, the tide is perhaps starting to go out for the most highly leveraged buyers.

Most existing mortgage borrowers have already passed this stress test; many locked into fixed rates. But higher rates will make this test harder to pass, stretching affordability at the point of purchase. As rates continue to rise, both price growth and transaction activity will slow across the mainstream markets, particularly in locations where affordability is already stretched.

Stress test pressure will be greatest where affordability is already stretched. That leaves space for three parts of the market to outperform.

First, the North. With house prices far cheaper relative to incomes and with support for investment and job creation through the government’s “levelling-up” agenda, we’re expecting mainstream values there to rise far more rapidly

Secondly, those markets less reliant on mortgage finance. This applies to the prime markets in London, where values are driven far more by sentiment and tax policy than affordability. But it also applies to senior living, where downsizers are often able to buy homes outright.

Finally, we have the private rented sector. With mortgages growing more costly and greater protection for tenants on the horizon, we expect to see rental growth outpace house price growth over the next five years.

2021 has been a year like no other. There is far more nuance to the market than can possibly be covered in a short blog. For the full story, be sure to check out our detailed residential property forecast document.