This year’s CBRE charity bike ride in support of Shelter promises to be bigger and better than ever. 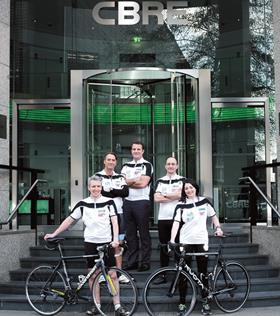 On 23 June, the property industry will descend en masse to Denbies Wine Estate in Surrey to take part in CBRE’s World’s Biggest Property Bike Ride. As the name implies, the event, held on behalf of CBRE’s charity partner Shelter, promises to be bigger than ever.

Last year, participants were able to choose between a short (25km), standard (50km) and epic (100km) course. The same options will be available this year, but in order to make the event more family-focused, an additional 5km course for children has been added. The hope is that the number of participants will clear the 1,000 mark for the first time.

“We want to make it a great day out for all the family,” says Malcolm Dalgleish, chairman, EMEA retail, at CBRE. “A lot of the attention is focused on people competing over the 100km course, but we want it to be truly inclusive. The epic course is a bit of a killer – it takes in every major climb available.”

However, it isn’t just about increasing the number of participants for the sake of it. CBRE is now into the second year of a two-year partnership with Shelter, under which it has pledged to raise at least £250,000 a year – a commitment it smashed in 2015, raising £296,000.

While fundraising events take place throughout the year, the annual bike ride is the centrepiece, raising £40,000 for the charity last year alone. The hope is that the figure can be surpassed at this year’s ride.

“We want it to be bigger in every sense,” says Dalgleish. “We want more people to take part, but the ultimate aim has got to be raising more money for Shelter.”

Riders’ efforts are clearly appreciated. “We’re hugely grateful to CBRE and its staff for once again getting on their bikes in support of Shelter,” says Campbell Robb, the charity’s chief executive. “We’ve been here to fight bad housing and homelessness for the past 50 years, and we won’t rest until we all have a place to call home. Every penny that is raised by CBRE’s incredible pedal power will help us to be there for families struggling to keep a roof over their heads.”

Quite apart from the fundraising, if last year’s event is anything to go by, the World’s Biggest Property Bike Ride promises to be a great day out. The courses may be challenging, but they are set in some of England’s finest countryside. What’s more, with all routes beginning and ending at Denbies, you know there is a decent glass of plonk awaiting you at the finishing line.

Visit www.cbre.co.uk/bikeride to book your place. See you there!

How funds raised for Shelter are used

Kate and her husband had been living in their private rented home for 23 years with their children of 17 and 13 years old. They had no rent arrears but one day, without warning, the landlord decided they wanted to sell the property. The family had two months to leave their home. They spent weeks trying to find a new place to live but they could not find anything they could afford with all the upfront costs of renting. Kate’s husband had already been struggling with anxiety and depression, which only got worse as their housing situation became more stressful.

With just two weeks left until eviction day, Kate contacted Shelter for help. The Shelter adviser Stefanie explained they did not have to leave on the date on the eviction notice, and was able to negotiate so the family could remain in their home until an alternative could be found. Stefanie explained to Kate and her family all the options available to them, and made sure their local authority offered them a suitable temporary property.

After moving into the temporary accommodation, Kate was determined to find a more permanent home. Stefanie continued to work with the family, and helped Kate apply for local authority financial support for a deposit and rent in advance. With Stefanie’s support and the assistance of the local authority, Kate and her family managed to find a privately rented home. The family has now settled into their new home, and have been able to get back to work and school.

The Kaluza family was referred to one of Shelter’s family services by their local Citizen’s Advice Bureau. The family of six – mum, dad, and four children aged from five to 13 – lived in private rented accommodation, and had fallen into rent arrears of more than £5,000. Their landlord had begun the process necessary to evict them and was harassing them for rent.

However, the flat was badly in disrepair, with severe damp, as well as rodent and cockroach infestations, and the landlord was refusing to carry out any repairs or improvements. Both parents were suffering poor health.

Following the referral to Shelter, the Kaluzas’ support worker liaised with the landlord to advocate for the family. She persuaded him to hold back on his plans to evict the family, and supported them to make a housing benefit appeal, which resulted in a full backdated payment clearing all of the outstanding arrears to date.

At the same time, the support worker addressed the disrepair by liaising with the landlord and making a report to the private rented sector team at the local authority. This intervention resulted in major works being done throughout the flat, including all the rooms being re-plastered, painted and carpeted; tiling and flooring being repaired in the kitchen and bathroom, and the infestations being cleared up.

* Real names have been changed