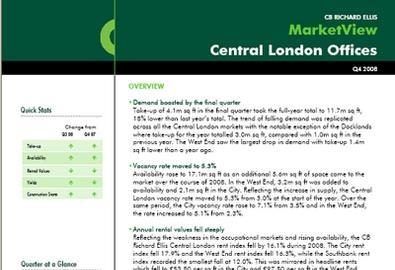 The trend of falling demand was replicated across all the central London markets with the notable exception of the Docklands where take-up in the final quarter of 2008 was strong at over 2.4m sq ft, boosted by the record acquisition by J P Morgan for 1.9m sq ft.

This took the full-year total to 3.0m sq ft, broadly the same as in 2000 which was the strongest year on record in the Docklands.

Total Central London availability rose to 17.1m sq ft as an additional 5.6m sq ft of space came to the market over the course of 2008.

The fourth quarter was the strongest of the year for investment and took turnover to £7.4bn for 2008, significantly below last year’s record of £17.5bn. Yields moved out further during the fourth quarter with City yields reaching 6.65% and West End yields 5.5%.

Peter Damesick, head of UK research at CB Richard Ellis, said: ‘As we move into 2009 more investors have started to express interest in the UK market, particularly Central London where the degree of re-pricing has made much of the core market attractive to the long-term investor.

‘The recent weakening of sterling offers an additional benefit to many cross-border investors with foreign currency denominated funds.’

Reflecting the weakness in the occupational markets and rising availability, the CB Richard Ellis Central London rent index fell by 16.1% during 2008.