Freeths think tank: will tech change the way we work?

Earlier this summer, Property Week in association with Freeths hosted a virtual roundtable to discuss the findings of the fourth annual Power of Proptech survey and look at the impact the Covid-19 pandemic has had on the digital transformation of the property industry. 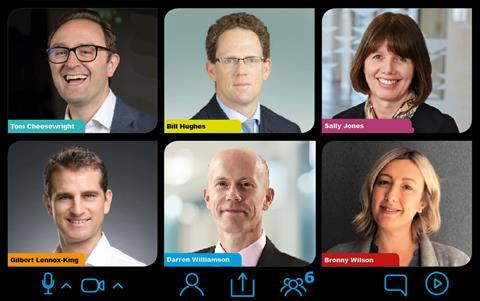 One of the questions we asked in the Power of Proptech survey was what software or proptech tool proved invaluable during the lockdown period. What did you personally find invaluable?

Bill Hughes: We had a programme to roll out MS Teams and its wider functionality and that was put in place at the end of December and it had literally just entered the business. I can’t tell you the joy of getting there just in time with MS Teams. It has been the glue that has kept everyone together.

Gilbert Lennox-King: We talk with our European counterparts all the time and at the start we were on Skype, but everyone seems to have ditched Skype and gone on to Teams, which seems to be a bit more reliable.

Darren Williamson: We were just starting to try LoopUp as a technology but we got pulled into Zoom and various other tools during lockdown. One of my big frustrations is the commonality of platforms. There’s nothing worse than getting an invite that sits in your diary and then five minutes before you’re due to get on a call you realise you’ve got to download a load of software you’ve never used before and it’s going to take 15 to 20 minutes. It would be nice if the industry adopted one platform. Odds on it will be Teams.

Bronny Wilson: We surveyed end-users across our platform globally and I think around 4,500 people responded. About 95% of those people were working from home and 80% said they had been either as productive or more productive working from home. Of those that were less productive, the majority said that was due to children, pets and other people in their household. So I think the tech has done an incredible job of supporting working from home.

The rollout of 5G is fundamental because until we get it, working from home will not be fully utilised

Sally Jones: I see it in two different buckets. We were very productive to start with because we were doing things that were very immediate and crisis-driven – such as how we lock down and how we help our customers – so it was very task-focused. And that was quite good, because we got through things very, very quickly. I think where it has become more difficult is where we are trying to do things that are more collaborative.

DW: Our lawyers have generally been at about 70% productivity. When you are tying several strands into one central location on a transaction that is very difficult to do remotely, it is much easier when people are together. And then there is the death knell, which is a poor internet signal. If I have to send out large legal documents across a rural broadband connection, it can take 15 to 20 minutes to send an email. In terms of what technological changes should be fast-tracked, the rollout of 5G is fundamental because until we get it, I do not think productivity and working from home will be fully utilised by all.

Aside from the broadband issues that Darren highlights, are there any other frustrations that you or your team have experienced during lockdown that have impacted on productivity levels?

BH: In the business I run I’ve detected a real difference between people who are late-career who live in houses with capacity and can turn one of their rooms into a study and that is workable, versus early-career individuals who have a totally different set of options to work from home. The frustration they have is it is simply not possible – irrespective of technology – to have a productive working environment because they may live in a small flat with children, animals, partners or where other people are working and I think it is really easy to lose sight of that. If the people who are making decisions about the new way of working are senior people, they will not necessarily fully pay attention to the working environment that would be faced by junior members of staff.

BW: I think that is a really great point. Normally, we do a staff engagement survey twice a year, but we have been pushing out short surveys every couple of weeks throughout lockdown to track people’s wellness and how they feel about working from home. There is a huge divide between people in senior roles, or people that are living outside the city, versus younger people who live in inner-city apartments and might house share.

Initially, people’s enjoyment of working from home was not that different, but as time has gone on it has become harder and harder for people in house shares because it is a constant juggle of which room can you get the right internet reception in and where can you find the peace and quiet you need while you are on an important call. So there is a whole other layer of challenge that technology is not necessarily going to change for those people.

SJ: Our biggest emerging frustration is that some of us are in the office part-time and everyone else is working from home and there is no decent technology that makes that work well. I think that is something people need to address because when we all go back to the office things are going to be quite fractured for a while.

In light of what has happened over the last few months, what sort of technological changes do you think we could see fast-tracked as a result of the pandemic?

DW: The Land Registry eventually capitulated that electronic signatures could be used despite all the potential issues we all know about such as fraud etc, and I can see transactions increasingly being slimmed down into very efficient electronic models.

GLK: I have definitely seen an increase in the use of DocuSign over the last few weeks. I’ve also noticed that within the Unissu proptech platform there has been a whole host of new tenders coming out in terms of companies that are looking at new technologies.

BW: We’ve probably had more RFPs [request for proposals] come through in the last month than in any other month in the history of Equiem. Anything related to the health and wellness of a building and its occupants is really high on the agenda and that includes things like indoor air-quality monitoring, sensors for density and technology that helps provide greater transparency for occupiers.

Tom Cheesewright: For me the biggest threat/opportunity is that people will look at what has happened in this crisis and the problems it has brought about and the potential for a repeat of a crisis like this, and they will look with a bit more interest at things where they can just take people out of the picture, where they can automate processes and do away with some of those things that currently require collaboration to reduce the risk of people being in the office.

Do you think this experience will slow down or accelerate the digital transformation of businesses in the property industry?

TC: The really interesting thing I’ve seen is lots of companies have actually had to very rapidly accelerate their digital transformation, but only in specific areas. The first wave of that has been to take all the friction out of communication with customers. If we are going to operate remotely, it has to be as easy as possible for them to communicate with us. That has been the first wave of investment and what I see happening now is a sort of second wave of investment that is looking at where the new pain points are with everyone out of the office and how we can address those.

BW: I think people are moving full steam ahead in terms of investigating and finding out what tech they should be putting into buildings and what is actually going to make a difference and prioritisng those investments, but these are difficult decisions and we do not know what the future is going to look like. So, how many of those things currently being investigated will be implemented? We’re going to have to wait and see.