Earlier this year, the world changed overnight for businesses.

Property Week’s fourth annual Power of Proptech survey, supported by Freeths and carried out during lockdown, shows the impact of Covid-19 on the property industry with technology such as video conferencing and digital meeting tools expected to have a lasting role to play post-pandemic. Image source: Shutterstock/Solarseven

Spare bedrooms became offices, kitchen tables became desks and meetings with colleagues and clients took place via video link rather than in coffee shops and restaurants. Many companies scrambled to get their heads around how to use their existing technology infrastructure to work remotely. For them, Microsoft Teams was just an icon pinned to their menu bar that lay dormant.

Meanwhile, other companies that had already embarked on a digital transformation journey and had started regularly using tools such as Teams and Zoom eased themselves into the new norm. And it is a new norm that is not going to go away any time soon, at least until a vaccine or cure for Covid-19 is found.

The seismic impact the pandemic has had on the property industry is reflected in Property Week’s fourth annual Power of Proptech survey in association with Freeths.

As part of the survey, which was conducted at the height of the UK’s lockdown period, we asked respondents ‘which piece of proptech or software has been invaluable to you during lockdown?’ Unsurprisingly, video conferencing technology topped the list with 48% of respondents saying MS Teams or Loop and 41.6% saying Zoom or Skype; the likes of WhatsApp, Citrix, Houseparty and Slack were among the 26 other software platforms mentioned.

Source: All infographics by Jane Davey

The good news is that people who used this type of technology in addition to other software were overwhelmingly positive about the impact it has had on their business. Some 63.1% of respondents stated that technology had “played a major role” in enabling them to maintain productivity levels during the Covid-19 lockdown and almost 93% of respondents said their experience of using technology during the pandemic was highly positive or mostly positive.

It is anticipated that this positive experience will fuel additional investment in different proptech tools and software platforms going forward. Just shy of 48% of respondents said they had already “increasingly begun to trial new technology” as a result of Covid-19.

The bulk of the new technology investment that will be made over the next five years is expected to be on home-working and digital meeting tools (81.8%) and on forging stronger digital links with the marketplace (50.2%) – by contrastthe top answer to this question last year was improved analytics and forecasting tools (74%), which was mentioned by just 45.8% of respondents in this year’s survey.

Regardless of where investments will be made in the months and years ahead, it is clear the property industry is increasingly willing to invest in technology and recognises the benefits it brings their business. Just over 93% of respondents said they believe technology investment will have a positive impact on their revenue in the next five years and just over 50% said it would have a significant impact.

These findings are not entirely surprising given that 97.3% of respondents state their business traditionally embraces technology, albeit the majority (56%) say the focus of their technology investment is on proptech that is market-proven.

It is too early to say with any clarity what the post-pandemic future holds for the industry, with the majority of employees of property companies still working remotely.

However, it is highly likely that some degree of homeworking will continue, which is reflected in the survey’s findings – increased use of digital/ virtual meeting tools (31.6%) and reduced building requirements as a result of homeworking (19.1%) are expected to have the greatest impact on the property industry in the next five years, replacing AI/machine learning in decision making, which was the top answer last year. Additionally, 75.6% of respondents say they now have a greater reliance on technology for things like meetings, especially with colleagues and clients overseas. 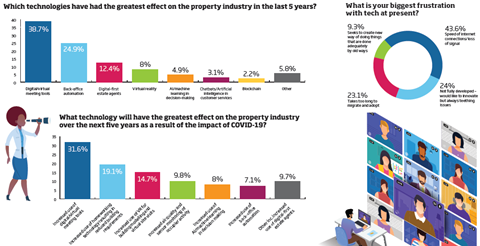 “Triumph out of adversity: who knew the pandemic would show us just how fundamental tech can be?” says Darren Williamson, national head of real estate at Freeths. “The industry has been catapulted into the digital sphere. As the results show, all we need now is better connectivity for all and we are set for a revolution.”