Accurate rates are vital to revitalising our high streets

It is obvious from a walk down many high streets across the country that we are still facing extremely challenging times, despite the general economic recovery. 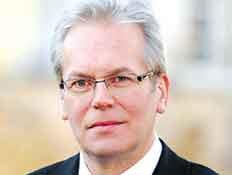 Rents, rates and the sheer complexity of operating in town centres have proved a barrier to many businesses entering this once traditional retail landscape. The hollowing-out of many town centres is undoubtedly a hard trend to counter.

The efforts that some towns and cities are making to reverse the trend through a real partnership between the public and private sectors, with government, local authorities, local enterprise partnerships, employment agencies, investors and occupiers all working towards a common vision, are encouraging.

The transformation taking place in Birmingham is a fine example. There is major investment in many sectors, including retail, with the opening of our new John Lewis department store at Grand Central and New Street Station, the office development at Paradise Circus and, of course, the plans for the new HS2 station at Curzon Street. The same is evident right across London, through a diverse range of regeneration projects from Stratford, where John Lewis and Waitrose have taken joint representation, to Waitrose’s involvement in King’s Cross and the new American Embassy area in Battersea.

However, it is not all plain sailing. Urban regeneration requires careful planning and many years of hard work to piece together the land ownerships and devise a plan that is sustainable for developers, investors, occupiers and the local communities. The mix of uses is softening from retail dominant to retail led with a growing blend of leisure, catering, residential and employment space to complement the shops. Increasingly, these projects can only come forward with public sector financial and political support.

This is true not only of smaller towns, but also of larger cities, including Sheffield, Glasgow and Edinburgh. In the time it is taking to move these plans to fruition, competition is growing both from the online world and from edge- and out-of-town developments, which are often more straightforward to execute.

We have an opportunity in the current Treasury-led review of business rates to address some of the factors critical to facilitating this vital challenge of renewal in our towns and cities. Previously adopted initiatives such as tax incremental financing that enable local authorities to invest in upgrading infrastructure could be supplemented by measures within the business rates system to encourage occupiers to these locations given the relative cost and complexity of operating in town centres.

The Valuation Office has a vital role in setting accurate rateable values in the forthcoming 2017 revaluation. It will be crucial to reflect fluctuations in property values between different locations so that they do not place a drag on high-street investment during a period of potential recovery.