It’s the time of year when we look back to consider defining themes for 2014 and debate what the sector has in store for us next. 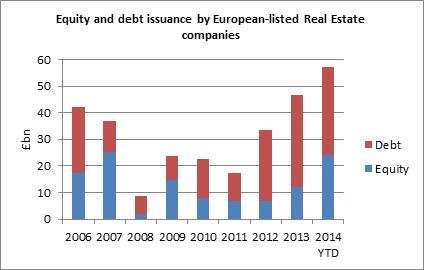 Most will consider 2014 as the year in which the UK and European property markets officially emerged from the doldrums of the economic crisis, as confidence across the board returned. In particular, the prediction that the European property market is on track to register its highest level of public equity and debt issuance this century is a landmark that deserves recognition.

I believe the driving force behind the surge in public financing activity is the result of several interwoven factors:

Despite this year’s often supportive backdrop, it’s rarely easy to deliver a major new financing deal. To be successful, execution risks have to be considered and managed carefully. Timing is crucial in volatile and fragile markets and particularly in today’s globally interconnected news cycle, there is the increased potential for socioeconomic shocks that can make or break a transaction.

Political and macroeconomic events can’t be overlooked, since they too can create significant disturbances in the market. At Hammerson, we have dealt with this first
hand, as the timing of our £400m equity issue was influenced by a “no” vote in the Scottish referendum.

As we go into 2015, do I think this funding boom will continue? At least in the UK, where there is a decent GDP growth forecast, the outlook seems positive. However, I think it would be naïve to expect plain sailing from here. Over the next few years, policy mistakes in the eurozone, global health scares and ongoing terrorist activities across the globe all have the potential to disrupt investor confidence and funding availability.

In short, there are some clouds on the horizon, but my personal view is that today’s cumulonimbi are not as dark as we have seen in the not-too-distant past. In our sector, I believe management teams and boards should continue to take advantage of the special market circumstances of positive growth prospects in our occupational markets, debt rates at all-time lows and high equity values.

While challenges are ever-present, our sector thrives on a positive financing environment, so let’s strike while the iron is hot.