Black Friday is upon us again. Depressingly. If only the media column inches and airtime devoted to such an artificially-engineered ‘retail event’ in any way translated to positive benefit for the UK retail sector. 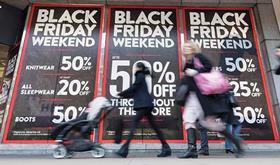 But over the last three years, UK retailers have desperately jumped on the Black Friday bandwagon and it has entered the psyche of many UK consumers. Last year marked the pinnacle and the sight of shoppers exchanging punches in-store over a TV set and endless anecdotes about online deliveries not arriving at the promised time linger uncomfortably in the memory.

Why is it a dark day for UK retailers, when it clearly represents a ‘sales bonanza’? Rather than a ‘retail event’, Black Friday is actually just a glorified promotion day. Promotions serve a purpose for retailers, but are not an end unto themselves. Promotions dilute retailers’ already slim margins and they need something else to compensate – either exceptionally high volumes, or customer traffic that they can leverage to full-price sales. A promotion is only as good as the spin-off trade that it generates – if shoppers just buy what is on promotion and nothing else, that promotion has failed, as many retailers have found to their cost. Not to mention the huge pressure and bottlenecks that this creates in retailers’ supply chains at their busiest time of the year. A common story from last year was even the most joined-up multi-channel operators such as John Lewis and Argos struggling to cope with demand.

A dark day for retailers, a great day for consumers? For some maybe, but not for most. Expectations for this year are sky high – unrealistically so and many will be disappointed. The jury is still out as to whether many of the ‘bargains’ are actually discounts at all. Many ‘marked down’ products are just reverting to their ‘normal’ price point, having spent the legally required time at a higher price. Many online shoppers will no doubt again be let down by delivery failures as supply chains again come up woefully short. Conned into thinking they are snapping up a bargain, left in the lurch by fulfilment limitations or getting embroiled in an in-store fist-fight – hardly ringing endorsements for ‘consumer-friendly’ shopping.

What of the stats that are readily doing the media rounds at the moment? Research figures from Verdict suggest that 37% of the UK population will partake in Black Friday shopping this year, meaning nearly two thirds of the population will not.

And what of the fact that some parties are predicting that Black Friday sales will top a headline-grabbing £1bn? A magic, seemingly big number, but is it really? Annual retail sales in the UK are, give or take, around £310bn, so a daily unweighted average would be around £850m. To suggest that this year’s Black Friday will be the first day when sales surpass £1bn is ludicrous. Given weekly trading patterns, daily retail sales routinely top £1bn – these days do not have the marketing ‘Black Friday’ strapline, they tend to go under the more mundane name of ‘Saturdays’. Indeed, for all the marketing effort that goes into it, we would hope that retail sales on Friday are comfortably north of £1bn, else it hardly seems worthwhile.

What are retailers themselves doing? Many are joining the Black Friday fray, others such as John Lewis and Argos, had their fingers burnt last year and are scaling back. Some (notably Argos and sister company Homebase) launched their ‘Black Friday’ deals a week early and are running them over a longer timeframe, presumably to avoid the bottlenecks in demand experienced when everything is concentrated on one day. Carphone Dixons (including Currys) have adopted a similar stance, even going a stage further to please grammatical purists and dub their promotion a ‘Black Tag Event’ (and to be frank, the term ‘Black Friday Weekend’ does smack of the ridiculous).

Ironically, having imported the whole ‘phenomenon’ into the UK, Asda has decided it has had enough and is turning its back on the whole thing. Others (Aldi and Oddbins) are making a virtue of not partaking in the event at all, but in so doing are at least acknowledging its presence. Next deserves special praise in its complete non-committal to Black Friday (and promotions generally). Next remains one of the best-run retailers in the UK and its non-participation in Black Friday speaks volumes. When Christmas has been and gone and analysis switches to sorting out the winners from the losers, Next will sit firmly in the former camp.

For all the media hype, the irony is that the real winners from Black Friday are probably those that opt not to take part at all.

Stephen Springham is head of retail research at Knight Frank