From steam engines to cotton mills, the North was at the forefront of the Industrial Revolution. 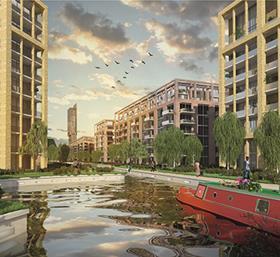 Ships from around the world docked at Liverpool, steel was smelted at Sheffield and the Manchester Ship Canal opened in 1894 to combat Liverpool’s taxes and keep boats carrying goods into the English heartland at a fair price. The North has always been connected, but for much of the twentieth century its transport lagged behind the South East.

Today the region can act as a central part of a new Industrial Revolution, provided investment in transport infrastructure and efforts to improve productivity continue at pace.

Attention has swung back to the North in the last few years, with the Northern Powerhouse agenda recognising the region as a political, business and investment heavyweight in its own right.

The Northern Powerhouse was a key theme of MIPIM last year and has been this year as well. The mayor of Liverpool and the chief executive of Manchester City Council led a conversation with delegates from both cities on how they can keep the northern steam engine rolling.

This will ultimately come from investment in transport, tackling the productivity gap, as well as wider placemaking, creating places people want to live and work in.

Manchester Airport will soon fly to China, a vital new link between the region and the outside world. But more needs to be done to connect northern cities with each other if we’re to build an effective counterweight to London.

Now this can’t just be done through High Speed 2, but pressing ahead with High Speed 3 as well. Connecting the entire northern corridor, from east to west, will be one of the cornerstones of a long lasting and successful Northern Powerhouse.

But moving beyond government funding of high profile infrastructure projects, the North just needs to be given the tools to do the job itself.

Government pledges like the devolution of business rates might go some way to delivering this, but it won’t be enough and could lead to competition between northern cities when they want to be collaborating.

Transport and devolution won’t be the only watermark for Northern success. To close the productivity gap with the South East more needs to be done to train the next generation. Many northern leaders, in both the public and private sectors, are pushing for partnerships with schools, employers and the higher education sector to ensure any gains made now are carried on for years to come.

The Northern Powerhouse is undoubtedly steaming ahead: more and more devolution deals are being agreed, Transport for the North has been fully incorporated and global investment is pouring in. For this to carry on northern leaders need to continue to co-operate and the government has to put its money where its mouth is on flagship transport projects. But, based on the Chancellor’s Budget, it seems we’re on the right track.

Mike O’Connor is a Partner at Addleshaw Goddard