In the initial aftermath of the Brexit vote there was an increasing demand for information and analysis on what impact, if any, there would be on the UK industrial and logistics sector. 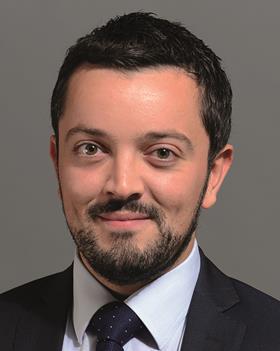 Once the initial dust had settled, Savills released a document entitled Reasons to be Cheerful and, if anything, it could be argued conditions have improved further still since publication.

Why Reasons to be Cheerful? As a researcher, I simply let the statistics tell the story, and post referendum the story remains largely unchanged. Essentially take-up is strong, supply of good-quality stock is limited and the development pipeline of speculative units remains well thought through.

This means that we do not envisage a development-led oversupply, and therefore vacancy rates are remaining low and rents are maintaining an upward trajectory.

Of the 15.4m sq ft announced for speculative delivery since 2013, almost a third of this space has now been let and, including units under offer or with strong interest, this figure comes close to 40%. 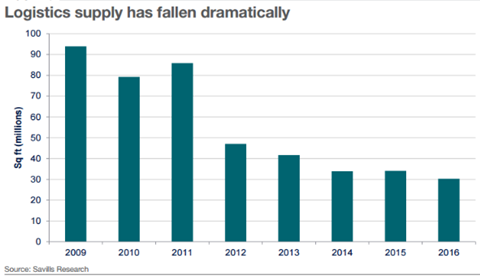 With a spate of units due to reach practical completion in August and September, there is now just 2.2m sq ft due for delivery in the fourth quarter and into 2017.

Total supply remains around 30m sq ft, compared to over 94m sq ft in 2009, although this is volatile in the case of units that reach completion and enter our statistics but are subsequently leased.

What does all this mean for the delivery of future speculative development? Following the Brexit vote, 5.5m sq ft has been leased, making it the strongest July and August since 2008.

However, since the vote there have been no new speculative announcements as developers and investors take stock, let existing units and wait for further data points to inform their view. 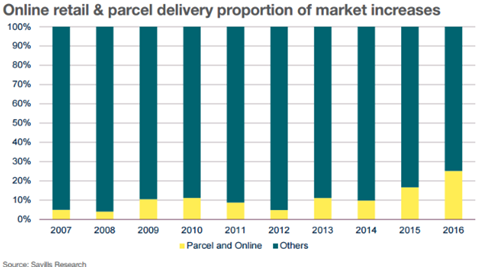 Given the fact that the retail sector, based on the long-term average, accounts for 45% of all take-up, I will be keeping an eye on the Christmas trading figures of major retailers and also the success of Black Friday as a precursor to future activity in the logistics sector.

In the meantime, many developers will be undertaking preparatory works to ensure they are able to make further speculative announcements for delivery into 2017. Investors should be reminded that funding developments speculatively will allow access into a stock-starved market where the occupational market fundamentals are robust, especially compared with other sectors.