Jerusalem is Britain’s unofficial second national anthem, sung with joy and gusto at weddings, school concerts and the last night of the Proms. 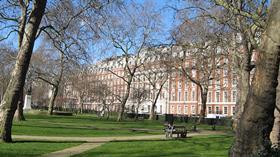 It should be adopted by the Department for Communities and Local Government (DCLG) and the Home Builders Federation as their marching tune - ‘Till we have built Jerusalem in England’s green and pleasant land’. The idea that cities are something attractive that we aspire to has been part of the quest for civilisation for thousands of years. The countryside was feared as backward, a place of ignorance, of dark woods and marshes, of superstition and outlaws. It is no coincidence that the word for pagans, ignorant unbelievers, is in fact the word for peasants, ‘paysan’, meaning country dwellers in French.

In this article, the first in an exclusive series I am writing for Property Week, I aim to advance the case for ‘urbanism’ in contrast to both nimbyism and rigid development control. Urbanism is the result of master planning. Urbanism is the creator of public open space. It encourages well-designed, relatively high-density, mixed-use buildings set around actively used open space. Beautiful cities are based around creating connecting places that allow for a range of buildings to front the places over time. The buildings and the places support each other. They are not in opposition. Mixed-use master-planning can also finance social infrastructure through the increase in land value, without using scarce public funds. Mixed-use master-planning encourages pedestrians. It promotes healthy living and community engagement. It enables people to come together easily to have fun and for ideas and goods to be exchanged readily. People and businesses do best when they are settled in neighbourhoods, districts and quarters, which each have their own identities with a wide range of amenities and attractions. Mixed-use master-planning is the antithesis of urban sprawl. It creates a high quality of life for the many and protects as much countryside as possible for the lucky few who live there and the many who enjoy visiting.

The best master-planners throughout history have understood these concepts. Whether they were planning on the massive scale of New York, with its Central Park and its high-density regular grid of stately avenues and streets, or on the scale of the early Victorian development of squares and crescents with communal gardens in Notting Hill or Ebenezer Howard’s late 19th century concept of garden cities with homes and jobs and allotments, far from Blake’s ‘dark satanic mills’. In all of these, design and urbanism contributed to quality of life. It did not detract from it. It enhanced it. Master-planning went hand in hand with civilisation and happiness.

What a contrast to the disappointing development we have seen since a formal system of town and country planning was introduced just after the Second World War. Behind that system, there were some immensely positive, visionary ideas, but the reality has let us down for a number of reasons. It was created at a time of austerity and poor design, which inevitably meant that much of its early output is unattractive visually. In disappointing the eye, it began the journey to giving development a bad name. It also began the process of politicising the decisions about when, where and how much development. It was no longer for private sector landowners with a series of development partners to say how Mayfair or Midhurst or Manchester were to be built. It was for a planning committee. Prior to the public sector taking responsibility for zoning land and thus artificially limiting the supply of development land, the private sector master developer needed to create value in competition with other landowners. To sell homes and to stay in business, the master developer had to provide suitably commodious streets, parks, churches, shops and pubs.

But in modern Britain, developers have rarely built mixed-use, master-planned developments. Rather one developer has built a housing estate; another has built a shopping centre; a third has built an office ‘park’; and a fourth has built a retail ‘park’. The roads and the real parks (places where people stroll and have picnics and play games, rather than park cars) and schools are now delivered by the public sector as a cost centre, not a profit centre. No wonder we have created few really attractive new communities when the responsibilities for different uses and activities have become so radically separated and an overview that combines the economic, the social and the aesthetic is so lacking.

Golden age of the car

The timing of the post-war housing boom is, in retrospect, also unfortunate because it coincided with the golden age of the car. The number of cars and light vans registered in England in 1950 was three million. Petrol was cheap, traffic was light and no one had begun to worry about pollution, obese children and alienation, all unexpected and unwanted side effects of the excessive use of cars. The number of cars and light vans today is 30 million. The roads are crowded, fuel is expensive and children are forever being ferried by fraught parents.

The location and design of housing and the expansion of edge-of-town office and retail parks assumed that cars were the natural and progressive way forward. Cars represented convenience and freedom. It didn’t matter that by spreading out housing estates at ever-greater distances from shops, schools, bus stations, train stations, workspaces and public parks, the possibility of getting to essential services became harder and harder for those without cars - still 25% of households. It didn’t matter that in aping the freestanding, commuter houses that had been built for the original, few, privileged car owners after the First World War, the planning system permitted more and more housing estates with detached houses with their own driveways and garages at the side, increasing the distance their occupiers had to walk to services; making it harder and harder for children to learn independence by walking to school or the bus stop; creating pressure for families to have two cars, not one; creating the morning rush hour as parents drop off children at school; and making it harder for parents to connect with each other as there is no time or space to stop and chat by the school gates.

It didn’t matter that the wiggling roads designed by traffic engineers to slow down cars for safety made the distances even further and flew in the face of the aesthetics of a walkable, interesting street, lined by handsome trees and buildings quickly leading somewhere. As part of this car-borne design, more and more houses were on cul-de-sacs. A cul-de-sac is a dead end. It’s not going anywhere - unless you get back in your car and turn around.

The result of disappointing design is, sadly, more disappointing design. The principal role of the planning departments in most local authorities has become ‘development control’. The name says it all: development control, like pest control. Development is not seen as a public good but more like a plague, an attack on the wellbeing and prosperity of the existing nearby citizens, the key voters in the local election that select the planning committee. At best, development is seen as a necessary evil, not an opportunity for public benefit. In the 2008 US election campaign, the acronym ABB was adopted by Liberal America, Anyone But Bush. In much of England, the planning acronym could be ABH, not quite the ‘actual bodily harm’ of criminal law, but ‘anywhere but here’. If there must be some development to meet employment need or housing need, let it be somewhere else.

This article began by identifying the strong links between urbanism, civilisation, wellbeing and even happiness. So it is a tragedy that activists now see it is as public-spirited to oppose development and letting the side down to support it. The acronym NIMBY, first in political currency in the mid-1980s, is so widely used it needs no explanation. But the trouble with nimbyism is that, by its nature, it is a regressive response. It pleads for no change rather than for progressive change. It wants to bring the drawbridge up to prevent more people and more cars coming into areas where countryside has been eroded, where the roads are crowded and where public services are under pressure. Nimbyism is entirely understandable. It is a natural reaction to 70 years of development that despite being highly constrained and controlled by the planning system - indeed perhaps because of it - has been deeply disappointing.

But if nimbyism is a more powerful doctrine than design and urbanism, we will continue this tragic waste. No one should take all the blame. Developers, architects, planners, landowners and politicians were each at fault and played their part within a system set up with honourable intentions. But enough time has passed for us to identify the problems and the patterns. We will be much more at fault if we do not get it right in the future. Rectifying the economic and social consequences of the past failures of politicians, planners and developers to build Jerusalem can be an important cornerstone to building the prime minister’s ‘big society’. The Localism Act was intuitively a good idea and potentially a keystone in the arch that would support better development and ultimately more development, but it was hugely naïve, given the ease of mounting a ‘no’ campaign.

Failure to maximise benefits of construction

So far, I have deliberately painted a darker picture of development over the last 70 years than is fair. A balanced picture would also contrast the quantity of attractive, purpose-built bathrooms and kitchens, the pleasure taken by occupiers in their gardens and on their balconies, the well-lit and safe workplaces, the flexibility and choice offered by travelling by car. But it is the picture I have painted that has failed to maximise the benefits construction offers to civilisation. It is the picture I have painted that has led to nimbyism. Politicians and economists of all political colours are convinced of the need for five million new homes in the next 20 years. But they all recognise that, with the current planning paralysis, we are on track to deliver barely 50% of that number.

Failure to do so will damage the economy for all and not just the economic prospects but the lives of most people who were not already on the housing ladder in 2000. But meeting the numbers without upping the game of master-planning will be impossible because of the local opposition it will create. Even were central government prepared to override such opposition, it would be a disastrous lost opportunity unless revived standards of master planning underpin the expansion. Five million new homes is a £1,500bn addition to the national balance sheet, more when you include the schools, roads and workplaces that go with it. It is the creation of the entire physical and social infrastructure for more than 10 million people. The buildings should be built to bring pleasure and productivity for at least 100 years. The street plan and public open space should be designed to last forever. The location of new development should assist the revitalisation of at least as many existing homes.

So these articles are a plea for politicians, planners, architects, developers and financiers to unite to purposefully create a new era of urbanism, to create places that will delight new residents and employees and offer not just homes and business parks but holistic communities - places that also bring benefits to existing communities. It is a plea for members of the public to engage with the possibility that with the right design and amenities - and in some cases even financial compensation - it will be both publicly minded and in someone’s own self-interest to welcome development nearby.