London is changing. Over the next 15 years, the population is set to grow by the equivalent of Leeds and Birmingham combined - it is already past its historic record population level. 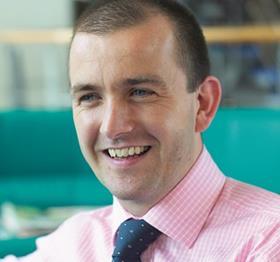 Half of London’s growth is forecast to take place in five East London boroughs.

When London tops 10 million residents, people will be thinking ‘where shall we live?’ but also ‘how will our infrastructure work?’ and ‘how will our needs be met?’

This is where the logistics piece comes in. The UK leads in the consumption of ecommerce in Europe and at SEGRO, we believe this change in consumer patterns will be permanent and enduring. Industrial is becoming ever more integrated into the supply chain and consumer cycles - many of our retailers are saying to us “our shops are turning into sheds with the number of deliveries and returns we have to handle”. For us, this reaffirms the vital role industrial plays in the fabric of everyday life and its place in the regeneration of London, specifically in the East.

Industrial regeneration creates more than just new facilities. It is the catalyst for jobs and business growth - it is the lifeblood of communities. Successful regeneration hinges on the careful balance of residential, commercial and industrial development - because this mix reflects how we live.

Land in London is scarce. Almost without exception, every redevelopment that SEGRO carries out in Greater London is on a previously-developed brownfield site.

Typically, we take a brownfield site that’s been used as a manufacturing complex, for example, or as a warehouse or storage facility. Origin, our flagship site in west London, is the former Guinness Brewery site, which we have redesigned and developed into a state-of-the-art logistics park. But it is more than just square footage and yard space - it creates opportunities for businesses to grow and employment to flourish, both of which are integral to the communities in which we live.

The number of jobs provided at an industrial site is increasing as our consumer trends evolve. Ecommerce and last-mile delivery have transformed the intensity of developments and more amenities are needed for them to run, often for 24 hours a day.

A prime example of this is the signing of online supermarket Ocado at Origin. Typically, a light industrial facility employs about 70 people, but Ocado will be creating 200 jobs at the distribution centre, enabling it to respond to the 24-hour demand from customers for their groceries.

SEGRO has taken its focus on job creation even further at Origin. Working with the local authority and employment partners such as the Job Centre Plus, we have delivered an employment scheme whose purpose is to increase levels of skills and employment opportunities in Brent. It will also enable new businesses that come to Origin to identify and recruit a local, talented and sustainable workforce.

Industrial development creates a broad spectrum of jobs, from director and manager level to the people who work on the shop floor, most of whom live within a 10-mile radius.

No longer is industrial represented by bellowing chimney pots, as IT and high-tech are fundamental to the business operations. For example, our customer DPD, the logistics company, uses highly sophisticated IT platforms and technical experts to co-ordinate customer deliveries in hourly slots. This is made possible by technical experts who wouldn’t normally be associated with a logistics warehouse.

Often, industrial acts as a stimulus for planning. Take the London Plan, City Hall’s 20-year vision, which has the two cornerstones of producing jobs and housing. London has an acute housing shortage, but the answer is not just to create swathes of monochrome housing estates. Industrial and logistics play a crucial part in making big residential allocations work. First, they provide local jobs and secondly, they facilitate the lives that we all lead now.

At the moment, City Hall is a big driver in providing new industrial schemes. The authorities recognise that housing alone won’t bring what London needs. After the political changes that we’ve been going through in the last few weeks, there’s still a lot of talk about the need for housing, but when you get into the details of the city’s strategy, it’s borne out that plans depend on both employment and housing.

While the media spotlight focuses on the need for residential property, stakeholders in East London - including local authorities, the Greater London Authority and Transport for London - recognise the need for a balance. The supply of employment land in London has plummeted by 40% in the last 25 years. Big transports projects have eaten it away, while the Olympics took 600 acres of industrial land. So the dwindling supply that remains needs to be protected.

The danger we face is losing industrial land as other types of schemes are taken too far. Brownfield, formerly industrial, land in Greater London is increasingly taken for residential schemes. This risk is certainly on our watch list and we often make this point to planning authorities. For other property sectors, certain areas are designated for certain uses, such as the Square Mile, which is synonymous with financial and business services. Areas of industrial land that have particular uses should be protected in the same way.

One option to speed up planning for industrial schemes could be the introduction of a simplified planning zone (SPZ), something we have in place at our Slough Trading Estate. However, delivery within an SPZ would be very difficult if an area is not under sole ownership. Slough Trading Estate is unique because we own the entire 474-acre scheme, which supports around 17,000 jobs.

With one eye on the horizon, we have been seeking to acquire land in east London for the last five years and will continue to invest where we believe London will grow, where our customers wish to be and the impact of regeneration will be felt most.

For the development of East London (or any area) to be successful, the property industry needs to look at development schemes on a genuinely long-term basis. SEGRO is very much an investor as well as a developer - we invest for the long-term rather than building, selling and walking away. This allows us to embrace job creation, regeneration and communities because we will be around for the long-term. That’s when regeneration works.

East London was for years thought of as an industrial area with few attractions for inhabitants, driven by London’s shipping sector. However, the area has changed over the past few decades. The boroughs that comprise east London - Newham, Hackney, Tower Hamlets, and Waltham Forest in inner London, and Barking and Dagenham, Havering and Redbridge in outer London - are gradually becoming densely populated areas with greater infrastructure needs.

The area’s population has always seen peaks and troughs. In 1971, according to data from the ONS, it dipped due to a decline in manufacturing activities and dock-related industries and many inhabitants moved out to Essex. Since then, the area has seen several regeneration initiatives, such as the establishment of the Thames Gateway Development Corporation. The Olympics was the most recent large-scale, redevelopment project, which had the bold aim of revitalising the area to reach the same economic and social levels as other parts of the capital.

While the impacts of such projects are yet to be fully felt, there’s no doubt the effect of wealthier inhabitants moving to the boroughs of Hackney and Tower Hamlets is being pushed further east into Greater London. The population of East London rose by 19% between 2001 and 2011, according to census statistics. Hackney, Tower Hamlets and Newham collectively saw an increase of more than 30% in working age population.

As the area continues to throw off the image of its industrial past, its population is becoming younger, denser and more diverse. The property industry needs to focus on regeneration projects that help it to become a vibrant area that competes with the rest of London - and keeping the balance right between property sectors is crucial for the sustainability of the entire ecosystem.

SEGRO is a UK real estate investment trust and a leading owner, asset manager and developer of modern warehousing and light industrial property, as well as of higher value uses, such as offices and data centres.

It owns or manages 5.7m sq m of space in £6bn of assets, serving 1,200 customers from a wide range of industry sectors. Its properties are located around major conurbations and at key transportation hubs across eight European countries, principally in the UK, Germany, France and Poland.