‘Kung Hei Fat Choi!’ Or, in English: ‘Wishing you good fortune and happiness’. 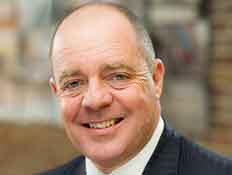 Chinese New Year was a few weeks ago now, but buyers from as far afield as Hong Kong, Shanghai and Beijing are continuing to celebrate the central London market.

The Chinese surged to prominence in central London in late 2015, showing particular interest in the West End’s Covent Garden, Aldwych and Soho areas. This trend is confirmed in my company’s new West End residential report, Our Patch, Our View - Q4 2015, which shows that international buyers accounted for 70% of sales in the last three months of the year.

Chinese buyers accounted for 35% of West End sales in the final quarter of the year - up from 13% in Q3. Overall, the West End enjoyed a robust end to 2015, with 33% of homes sold in the final quarter selling for upwards of £2,250/sq ft - the highest average value achieved since 2012, and an increase of 23% on the previous quarter. But why the sudden increase in sales to the Chinese?

First, international buyers put decisions on hold before last May’s general election, fearing a left-wing Labour/SNP government. When the Conservatives were elected instead, the brakes came off.

Second, we believe the surge of Chinese interest in London property has been caused by the volatility in the Chinese stock market, with the yuan becoming increasingly devalued. This volatility has led Chinese buyers to increasingly seek offshore havens for their money, with London property considered one of the world’s best stores of wealth.

Also driving sales in the final quarter was the high proportion of Chinese students studying in or near the West End at establishments such as the London School of Economics, whose parents are often keen to invest in property close to these institutions.

Although the West End saw significant Chinese interest in the final quarter, Chinese and other international buyers also spread their wings to some other emerging London markets, including Nine Elms.

I spent a week last month in Qatar, Abu Dhabi and Dubai, where it was clear that developments benefiting from new infrastructure - such as Nine Elms with its two new Northern line stations - have excited international buyers.

Crossrail, too, is generating strong interest. At Berkeley Group’s 250 City Road, Crossrail will be open nearby prior to the development’s practical completion. This route, which will link Heathrow airport in the west to Canary Wharf and beyond in the east, is crucial in Chinese buyers’ eyes. The fact that Heathrow airport via the nearby Farringdon Crossrail station will be a mere 32 to 39 minutes’ travel from terminals 1, 2, 3 and 4 respectively, compared with the current 90 minutes, is a huge enticement to them.

250 City Road is also an excellent example of placemaking, combining a 190-room hotel by nhow, which is already recognised for its boutique approach in Milan, Berlin and Rotterdam, with prime residential development. The scheme also has good accessibility to the City and West End as well as Tech City, which also appeals to young entrepreneurs.

Other trends we saw in the final quarter in the West End include new-build properties accounting for 67% of our sales, the total value of sales rising by 15% and a 65% increase in the volume of sales compared with the first half of 2015.

There are headwinds in the London market - with rises in stamp duty, creeping uncertainty over Britain’s role in the EU and the worldwide commodities rout denting the appetites of some overseas investors.

But the Chinese are renowned for their long-term approach, and it is intriguing that they are continuing to recognise London property’s role as a safe store for their wealth. In the final quarter of 2015 they arrived in London’s West End in force - with Chinese New Year no doubt celebrated in many new homes.