You can always go Downtown: the astonishing revival of New York’s Financial District 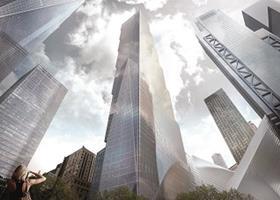 2 WTC is an 80-plus-storey skyscraper yet to be built and not yet fully designed. Renderings released by architect Bjarke Ingels Group (BIG) reveal a dramatically stepped tower like none other Downtown, or anywhere in Manhattan. If the non-binding agreement leads to a done deal, it would be epochal news for all parties: completion of the WTC in large part through Silverstein’s efforts, and a towering monument to Murdoch’s globe-spanning achievements.

A move to 2 WTC would more than cement Lower Manhattan’s rising status as the new centre of gravity for TAMI (technology, advertising, media and information) in the city; Murdoch’s companies would join Condé Nast, Time Inc, GroupM, McGraw Hill and dozens of others relocating from Midtown.

But one week prior, a different news story spoke almost as meaningfully to Downtown’s stirring rebirth. British chef April Bloomfield and her partner Ken Friedman, who run New York’s insanely popular Spotted Pig and The Breslin restaurants, signed a deal to operate a four-level dining and drinking venue on the top floors of 70 Pine Street — the landmark, 66-storey former AIG headquarters tower that Rose Associates is converting to 664 luxury rental apartments and a 132-room extended-stay hotel.

That project, to open next year, will bring more than 2,000 new residents to a dark corner of Downtown’s eastern edge. It’s part of a transformational whirlwind almost too extensive to grasp. It confounds a surprising number of Manhattanites for whom ‘Downtown’ means Tribeca and Soho. In fact, the most dramatic change is occurring south of Chambers Street (on the west side) and the Brooklyn Bridge on the east side.

To uptown New Yorkers, who believe the Wall Street area’s dining scene is irredeemably dull, the Bloomfield/Friedman news came as a miracle. But it shouldn’t have: many super-chefs including Joël Robuchon and Tom Colicchio have eateries in the works there. A vast dining-and-gourmet market complex called Le District, dubbed a ‘French Eataly’, just opened in Brookfield Place and a 4,000 sq ft satellite of the real Eataly will open soon in 4 World Trade Center.

The Wall Street area was historically dead after dark and at the weekends. Men on the street outnumbered women 10-1. Modest change began in the 1990s as a few old office buildings were converted to residences, but real change didn’t start until after 9/11 — paradoxically, a time when some believed the old Financial District had no future for commercial or residential use.

There was a short-term exodus as many inhabitants, especially in Battery Park City, had to flee apartments ruined by smoke and debris. But great cities work in mysterious ways. Tax breaks to create apartments and job-retention credits helped. So did an emotional urge to reclaim the streets from the terrorists’ work.

Today, Downtown bears little resemblance to the old Financial District. Both office buildings and new apartments have drawn a young, creative class. Streets once quiet off-hours can be overcrowded with tourists flocking to the 9/11 Memorial Museum and the Observatory atop 1 World Trade Center. Most remarkable is the influx of families, drawn to the area’s singular quality of intimacy amid monumentality.

Those availabilities must compete with newly minted, equally fine space under construction in the Far West 30s Uptown, and with One Vanderbilt, a 60-storey tower next to Grand Central Terminal that has just been shown the green light.

The district’s renaissance is in full flower. The residential population is more than three times its pre-9/11 total. Office vacancy is below 11%, astoundingly healthy in light of millions of square feet of new construction. Asking rents in class-A towers have risen 12.5% in the past quarter to $61.90/sq ft, the highest in the district’s history, according to the Downtown Alliance.

Time will tell if development has overreached demand. But for now, Lower Manhattan resembles an impossible dream rising gloriously out of the ashes.