The UK property market in 2016 was dominated by one event – the EU referendum. The most dramatic repercussions came in the hours and days after the vote. The UK Real Estate Index plunged 22% in just two days and companies with a strong bias to the London office market saw their share prices fall further still. 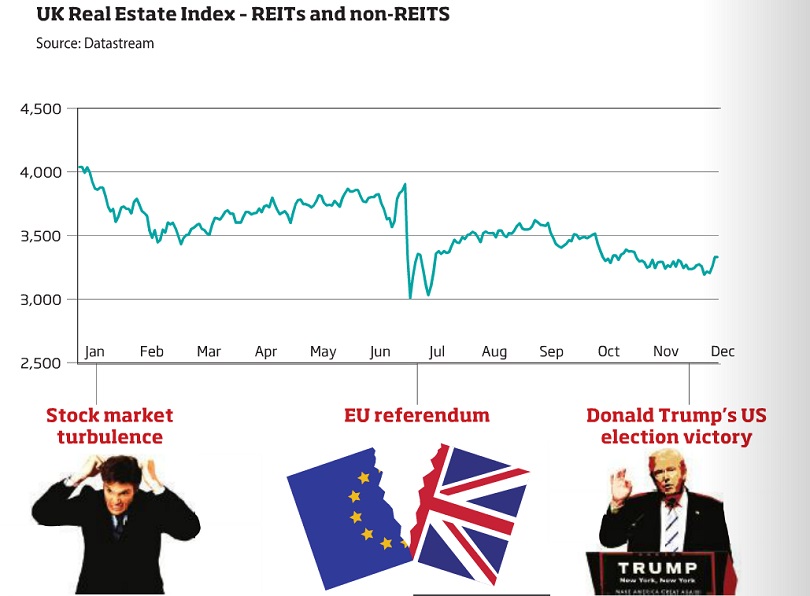 Meanwhile, property funds for retail investors were hit by a wave of mass redemptions, forcing many to suspend trading. Net sales from property funds totalled £1.5bn in June and £790m in July, according to the Investment Association.

The redemptions had a knock-on effect on the investment market as they forced funds to put properties up for sale to rebuild their cash positions.

The total volume of transactions during the year was also affected by the Brexit vote as investors chose to sit on the sidelines in the run-up to the event and the aftermath. Total transaction volumes are set to be 27% down on last year at just over £52bn, according to Property Data.

However, the impact of the referendum result failed to affect values as much as commentators initially feared. Capital values fell by 2.8% in July, but have since stabilised and in October even grew by 0.1%, according to the MSCI IPD All Property Monthly Index.

Parts of the market have been particularly resilient. Industrial has held up the best out of the three traditional sectors of the commercial property market, with values falling the least and letting activity continuing apace. Indeed, the third quarter turned out to be the busiest third quarter on record, with 10.5m sq ft of lettings recorded.

Even in the office market, investment and lettings activity remained strong in the regions. Several cities continued to see significant rental growth including Reading, Glasgow and Belfast, according to Lambert Smith Hampton (LSH).

“An intriguing year lies ahead for the UK’s office markets,” said Oliver du Sautoy, head of research at LSH. “With supply broadly in check, many of the UK’s regional markets are forecast to see an increase in prime headline rents during 2017, as newly delivered stock is taken up.”