The next mayor of London could deliver thousands more affordable homes if central London boroughs were encouraged to funnel investment into low-cost homes in outer boroughs.

That’s the finding of new research from BNP Paribas Real Estate (BNP PRE), which accuses politicians of “skirting around the issue” of housing in the capital, and calls for radical changes in policy to address the affordability crisis.

By the time Boris Johnson leaves office, the average London house price will have jumped by 56% over his term, the research shows. That’s a £170,000 hike, compared to an average wage increase of less than £10,000.

This has priced many out of the market, and pushed the need for affordable rental homes to levels that developers cannot sustain. The issue has been central to the London mayoral election campaign, and BNP PRE claims to have found a few solutions. 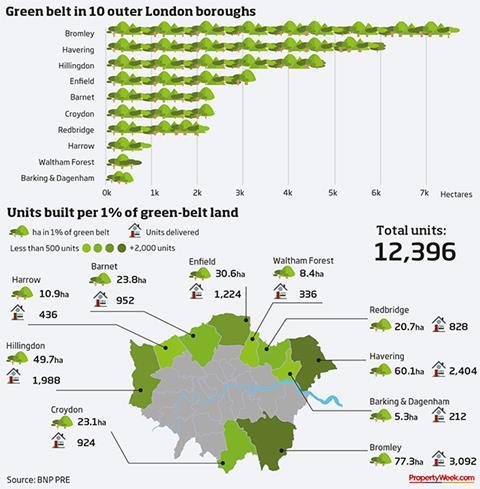 But if those boroughs invested the money in the five lowest-value outer London boroughs - Bexley, Barking & Dagenham, Newham, Sutton, and Havering - 2,600 homes could be built.

The main reason for the disparity is the high cost of development in central London.

For example, BNP PRE calculated that the £78m the developers of the Chelsea Barracks paid to the City of Westminster in 2011 in affordable housing contributions would have provided only around 86 units in the borough. But if that cash was invested in outer London, nearly 450 homes could have been built.

“These calculations, although relatively crude, point to a need for the new mayor to get the 33 London boroughs working together to decide how affordable housing supply could be increased through targeted investment of payments in lieu,” says Anthony Lee, head of affordable housing at BNP PRE.

The move would be controversial, however. Campaigners label any plans by councils to shift affordable housing to areas beyond their borders as “social cleansing”, and oppose what they say would be a Paris-like transformation of the capital, in which low-value housing is sent to the outskirts.

But it’s not the only solution BNP PRE suggests. According to the research, if developers had access to just 1% of green-belt land in 10 outer London boroughs, 12,500 affordable new homes could be built. That would be just a fraction of the hundreds of thousands of homes London needs - but it would be a start, and could catalyse further development.

Both solutions are politically “unpalatable”, admits Adrian Owen, head of residential consulting at BNP PRE. But don’t be surprised to see them continue to crop up as the failure to tackle the housing supply crisis in the capital continues to drive up prices.