Food and drink market starts to cool after years of growth

The market for food and drink outlets is reaching saturation point after years of expansion, according to Colliers International. 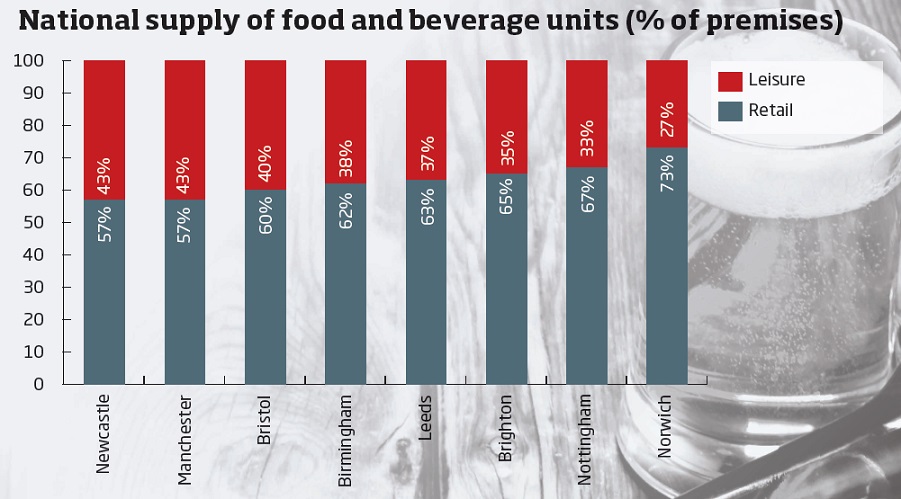 Analysing the split between leisure and retail in towns across the UK, Colliers found that leisure currently accounts for 37% of premises, and in some towns including Newcastle and Manchester it now accounts for more than 40%.

Restaurants and cafés have proliferated thanks to growing consumer demand and landlords have fuelled the growth by pursuing extensions and refurbishments dedicated to food and drink. For shopping centre owners, the trend has had the added benefit of increasing dwell time and spending.

However, Ross Kirton, head of UK leisure agency at Colliers, says there is limited scope for further expansion in some areas and not all landlords have been successful in attracting leisure tenants.

“The food and beverage market has started to cool. Some locations that have expanded their offer rapidly are now over-saturated, leaving some schemes with a more challenging outlook,” says Kirton.

“All too often, landlords and developers have been ill advised on the number of new units a scheme can support and an increase in A3 provision has been seen as a sticking plaster for troubled schemes.”

However, he adds that some towns are bucking the trend and are continuing to see an increase in supply. For example, in Newcastle, the proportion of leisure units has grown from 39% three years ago to 43%, boosted recently by Intu’s new restaurant development Grey’s Quarter at Eldon Square, which has attracted new entrants to the North East market such as pizza chain Inferno and American burger brand Smashburger. Other destinations in the city, such as The Crown Estate’s The Gate, which is fully let, are also performing well.

“Major city centre and affluent suburban locations will continue to prosper,” he says. “However, in lower-catchment areas and secondary schemes it will become increasingly tough to attract interest.”