The survey, which factors in 22 different costs from rent to business rates and waste management, shows that costs across the ‘big six’ cities of Birmingham, Leeds, Bristol, Manchester, Edinburgh and Glasgow now stand 42% below London’s Midtown district, narrowing from 44% last year.

Lower occupancy costs in London were the main driver, although cost increases in other parts of the UK also helped close the gap.

In the capital, the most dramatic decrease in costs was seen in the West End core, where they fell by 9.6% year on year to £18,145 per desk. Lower rental costs, including more generous incentive packages, were the main factor behind the fall.

However, Oliver du Sautoy, head of research at LSH, argues that there are still significant cost advantages to relocating from the capital. “While the softening in rental levels within some of London’s key submarkets has driven a slight narrowing of occupier costs compared with elsewhere, the cost appeal of the UK’s regional cities over London’s Midtown remains compelling – prior to the last recession in 2008, the discount was only 35%, compared with 42% currently,” he says.

High living costs in the capital could also make it increasingly hard for London-based companies to attract young workers, he adds.

Aside from rental costs, LSH notes that the day-to-day running costs of operating an office have picked up over the past year, reflecting rising inflation. Excluding rents and business rates, they have increased by 1.9%. 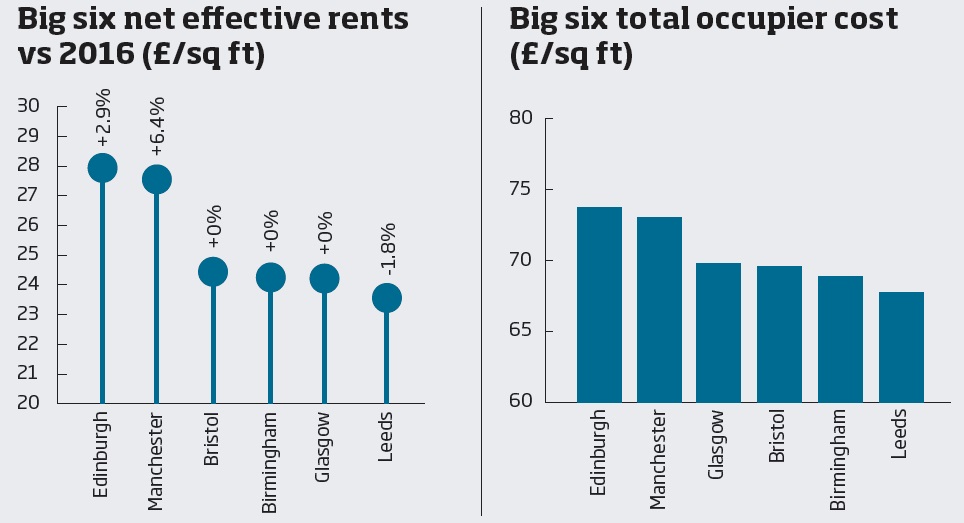 As for the rates revaluation in April, LSH says this only had a limited impact on overall occupancy costs. Although rate costs fell in some markets in the regions, the transitional cap reduced the extent of the change.

For example, in Preston the actual phased rating costs in buildings with a rateable value over £100,000 stands 40% higher than the unphased level.