Take-up in the regional office sector during Q3 was almost twice the five-year quarterly average, according to GVA’s latest Big Nine report.

According to GVA, which collected data across the UK’s nine major regional markets, four large deals to the Government Property Unit have lifted take-up to the highest quarterly total on record.

“With the GPU deals providing such a boost to activity, it does beg the question how the rest of the market is performing,” said national head of offices at GVA Carl Potter.

“Underlying demand is proving to be robust, especially in the city centres, although we are also seeing some caution with an increased number of lease re-gears compared to recent years.”

Boosted by Edinburgh’s GPU deal in Q2, total city centre and out-of-town take-up for the year is expected to rival the levels witnessed at the peak of the market in 2015, pushing to more than 9m sq ft. 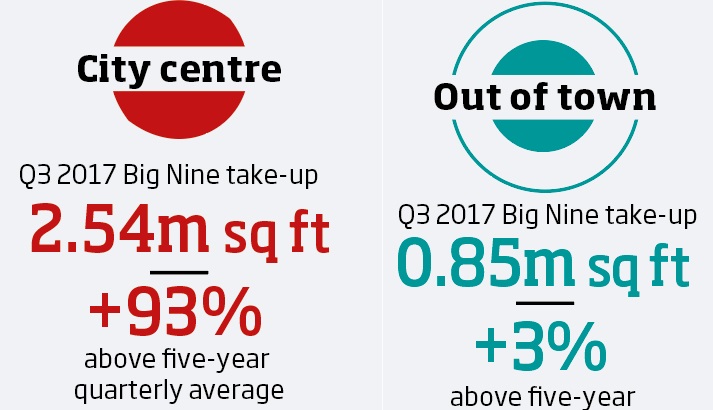 Data shows that Manchester hit the top of the list with 721,000 sq ft taken-up during the third part of the year and had the best performance in 2017 reaching 1.6 m sq ft so far. It was followed by Leeds, where 664,000 sq ft were transacted in Q3.

Largest in a decade

The research further highlighted that the number of deals in Cardiff, Leeds and Liverpool were the largest quarters in the cities ever, and Birmingham’s the largest in a decade.

Other large deals across the city centres this quarter included: the 69,000 sq ft let to Aberdeen Standard in Edinburgh, two 70,000 sq ft leases to DWP and Clyde & Co in Manchester, as well as 44,000 sq ft to We Work for their second site in Manchester.

The Big Nine review also reports an improvement in rents. Average net effective rents reached a record level at £24.62, an increase of 3% over the same period last year.

Notably, there has been an increase in serviced office space. While this has usually been about 2% of take up, it rose to around 10% last quarter.

Potter added: “There is an increasing shift in the way occupiers are looking to use space more flexibly as attitudes and technology change, with more co-working space requirements for the expanding knowledge sector as well as more traditional occupiers.”