How the North West was won

Who owns the North West? To find out, Property Week commissioned Datscha to pull together a list of the 200 largest property owners in the region by square foot and rateable value. 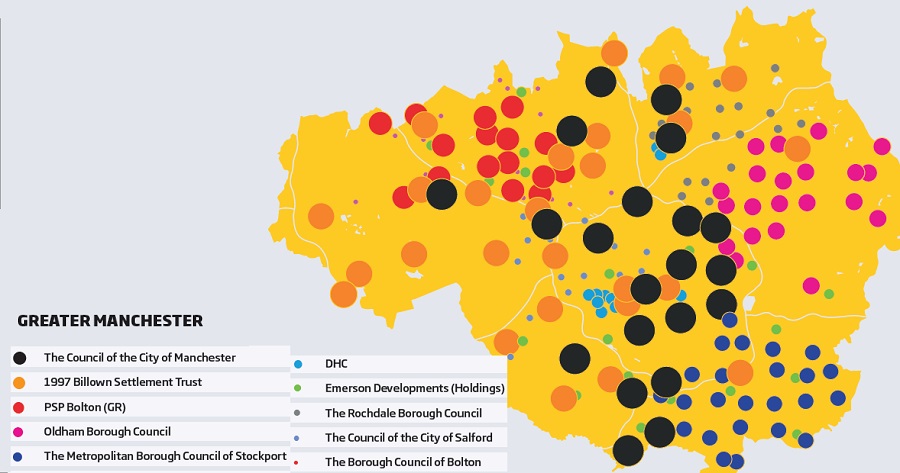 Manchester City Council is the largest landlord in the region by space and rateable value, with a total of nearly 17m sq ft of assets, 32.4% of which are industrial and 21% retail. In close second place in terms of space and third by rateable value is the 1997 Billown Settlement Trust – the private family trust of Peel Holdings’ John Whittaker.

However, when it comes to Manchester itself rather than the wider region, the council and other civic bodies such as the universities are still the main players in the city’s property market.

"Despite the fact the city is a known centre of investment, its development and growth are still being driven by its institutions,” says Mark Bruno, managing director of Datscha UK.

While Manchester City Council is the dominant local authority in the region, other councils are catching up. For example, having partnered with private sector firms to form PSP Bolton in 2011, Bolton Council is now the ninth-largest landlord in the region by area, with 4.6m sq ft of space under its ownership.

Another local authority on the list – and the acquisition trail – is Stockport Metropolitan Borough Council. Its property portfolio amounts to more than 3.5m sq ft and in recent years the council has snapped up properties with a cumulative value of around £1bn. It is now looking to deliver a series of ambitious projects with joint venture partners from the private sector.

When it comes to private sector ownership, private landlords in Greater Manchester hold 35.08% of the real estate in the city region, with the grocers coming out on top. “Major supermarket groups feature among the top 10 before the list branches out to include other big businesses,” says Bruno.

One of the biggest developer-owners in the wider North West in terms of the value of its estate is Intu Properties, which holds assets with a total rateable value of £85.9m. It owns the 1.9m sq ft Intu Trafford Centre and a joint stake in the 1.4m sq ft Manchester Arndale alongside M&G Real Estate.

“Manchester is a first stop for retailers looking to expand into the North West,” says Colin Flinn, regional managing director at Intu, adding that the firm is currently eyeing up further expansion