London home to almost half of offshore-registered properties

Analysing the overseas ownership data released last week by the Land Registry, Property Week found that 87,535 properties in England and Wales are owned by offshore-registered companies.

Greater London has by far the most offshore-owned properties with 37,910, or 43.3% of the total. The South East has the second-largest concentration with 16.2%, while the North West is third with 11.1%.

The City of Westminster leads the way, accounting for 1,151 properties or 22% of the total, followed by Kensington & Chelsea and Camden.

“If this balance were to increase significantly, we might be in a situation where we see the government closing in on loopholes on secretive property ownership.” 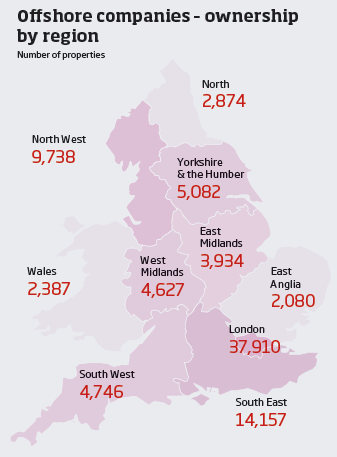 He adds that increased transparency may help dissuade investors from using tax havens as they will want to avoid the “PR backlash” that can come with revelations of offshore ownership.

In London as in the rest of the country, the Channel Islands are the most popular offshore jurisdiction accounting for 37% of properties. The British Virgin Islands follow at 32% and the Isle of Man accounts for 13%.

The Datscha data relates to freehold commercial properties whereas the Land Registry data covers freehold and leasehold properties across both commercial and residential.

Ownership by country of registration
Infogram