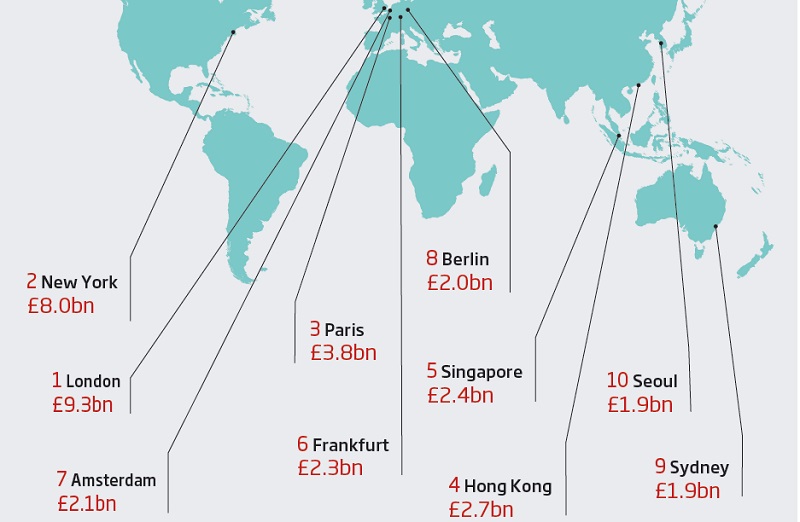 The proportion of office deals involving foreign buyers was also high compared with other global cities. In London, 77% of buyers were from abroad compared with 65% in Singapore, 40% in New York and 33% in Paris.

The most prolific buyers of London offices in 2016 were from China and Hong Kong. They accounted for £2.9bn of London office deals last year, significantly more than Middle Eastern investors who invested £1.6bn and were the second most active group of foreign buyers.

However, there are doubts over whether investors from China and Hong Kong will be able to invest as much this year as they did in 2016. Capital controls put in place in China to protect the currency may “reduce purchases from some buyer types”, warns Anthony Duggan, head of capital markets research at Knight Frank.

However, he believes the restrictions will be temporary and predicts that in the meantime there will be plenty of demand from other regions to pick up any slack.

Knight Frank predicts that London will benefit from the continued weakness of the pound as well as the uncertainty surrounding upcoming elections in Europe.

“Overall, we expect a solid market this year and one that will benefit from the global geopolitical uncertainty that will undoubtedly echo around Europe and the world as the year progresses,” says Duggan.

“This will be supercharged by the ongoing weakness of the currency, which has seen values fall 17% in dollar terms over the last few months.

“Indeed, it is more likely to be a restricted supply of assets for sale over the course of the year rather than a let-up in demand that will limit transaction volumes in 2017.”