The north of England suffers from the highest percentage of persistent retail voids in the UK, according to new data from the Local Data Company.

According to Local Data Company figures, 33% of vacant units across the UK tracked by the company have been vacant for more than three years. This equates to 22,878 empty redundant shops – or more than 14 Liverpool city centres, says Matthew Hopkinson, a director at the Local Data Company. He adds that persistent retail vacancies in a location are a key indicator of retail health.

“High percentages of short-lived vacancy are positive churn while long-term vacancy, arguably two years or more, is a sure sign of a weak market, oversupply or outright structural degeneration,” explains Hopkinson.

“Many towns and indeed shopping centres have issues in this regard, and where it is focused in one area one might consider this as an opportunity for change, but where it is spread everywhere this is a much bigger problem to address.”

The south of England suffers from lower vacancy levels than the north. The data shows that total retail vacancies in the South East are running at 9.2% (with 1.7% empty for more than five years), with total vacancies in Greater London standing at 7.6% (with just 1% empty for more than five years). Hopkinson says the data underlines the north/south divide when it comes to retail health.

“The challenges of the north versus the south are very evident in this regard and persistent vacancy is often a mirror of the local economy or where new development has replaced secondary stock that has no further purpose as retail or indeed as commercial space, but sits there as a clear and highly visual blight on a place,” says Hopkinson. 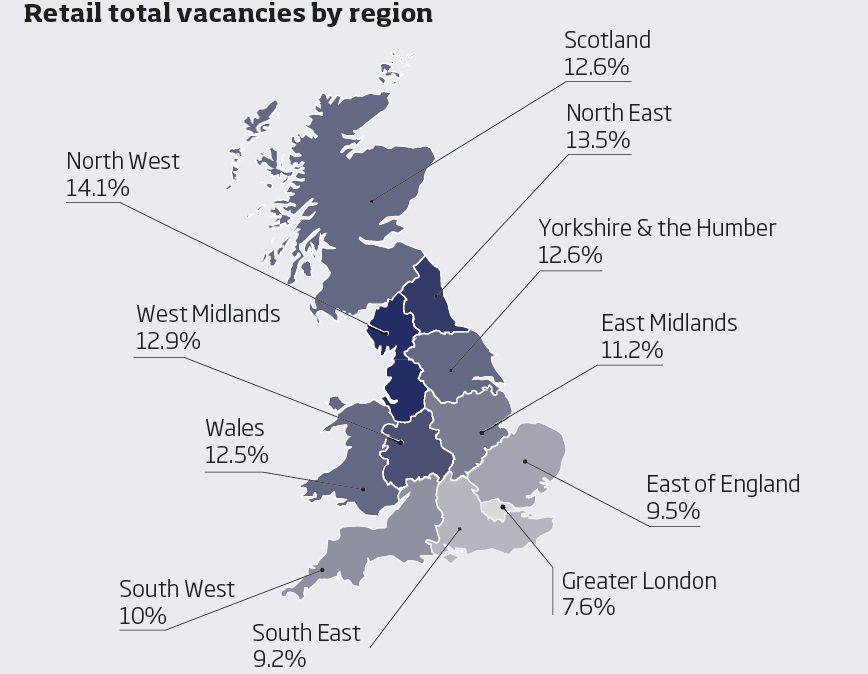