With an average search volume of 12,100 per month for the term “online estate agents” it’s clear the demand from consumers aiming to sell their home online continues to rise.

Following the launch of an investigation into online property portals, with data from SEMrush, PW has teamed up with Blueclaw to analyse how three of the better known online agents – emoov, Tepilo and Purple Bricks – perform against each other from a search perspective. 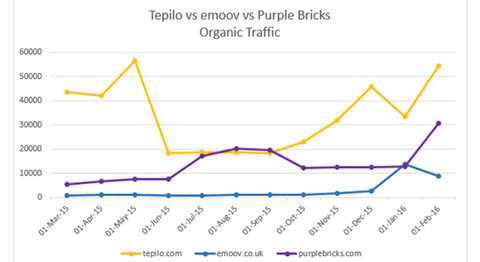 There is a clear winner in terms of volume of organic traffic, with Tepilo now attracting over 50,000 visits per month. They have clearly been ahead for the vast majority of the time, however in the summer of 2015, Purple Bricks saw a considerable increase in traffic which meant that they were marginally outperforming Tepilo in August and September.

By comparison, emoov have been considerably behind their competitors in terms of traffic until January of this year, when they were neck-and-neck with Purple Bricks, but by February, they had fallen some way behind. 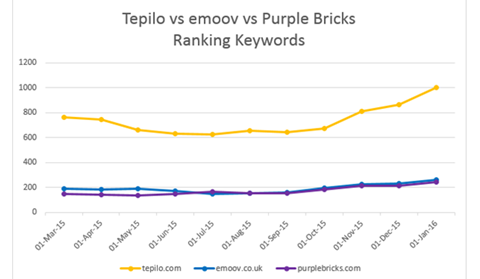 For ranking keywords, the data considers Google rankings for terms 1-20. Tepilo are a considerable distance ahead for the number of keywords they are currently ranking for.

The other two websites are fighting it out for second place, and were very closely matched through the duration of last year.

It is important however to bear in mind exactly what the keywords are for which each site ranks.  For example, a site may rank for the terms “properties in Reading for sale” which only attracts an average of 20 searches per month, instead of the real money terms such as “online estate agents”, which attracted an average of more than 12,000 searches per month. 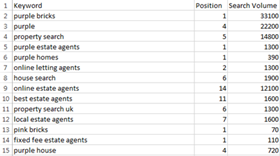 Based on these in-depth search rankings Purple Bricks have done a good job in building their rankings around their brand, with the site ranking for “purple bricks”, “purple”, “purple estate agents” and many more phrases related to the colour purple on which the brand is built.

Despite terms such as these likely to be currently making up a large proportion of their traffic from an organic search perspective, it’s important that they are also ranking for terms which attract a large number of searches such as “online estate agents”, for which they currently sit in 14th position.  This suggests that Purple Bricks currently do not have enough on their site to get them to rank for this keyphrase. In comparison, both Tepilo and emoov both rank for the term ‘online estate agents’, in first and third positions respectively.