Positive start to 2016 for Birmingham and Manchester offices

The first quarter of 2016 has been positive for both the Birmingham and Manchester office markets as both cities showed healthy levels of activity. 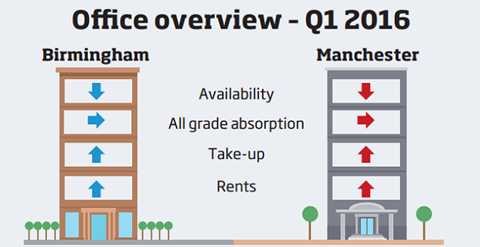 Following record annual take-up of 970,458 sq ft in 2015, the Birmingham office market enjoyed its busiest-ever first quarter this year, according to the latest regional data from Colliers International.

This was down on Q1 2015 and below the long-term average. However, the imminent completion of the 80,000 sq ft letting to Freshfields at One New Bailey would have pushed up the Q1 figure.

Colliers said the level of active demand for office space in central Manchester remained healthy, driven both by local and national demand.

The business services sector accounted for around a quarter of the total take-up in Q1, followed by retail and leisure (21%), legal (18%) and media and tech (12%).

Given the current levels of annual grade-A office take-up and the expected completion of lease transactions under offer, the Manchester office market is likely to experience an unprecedented complete absence of ready-to-occupy supply by mid-2016, which will persist until at least Q3 2017, Colliers said.

However, that shortage is likely to ease in the coming years. The city has 1.34m sq ft of consented office schemes in eight buildings and 967,832 sq ft of grade-A space will be delivered between the end of this year and 2018.