Profits in the care home sector have come under pressure this year as a result of rising costs, Colliers International's latest healthcare market review shows.

Margins have been squeezed the most in the personal care segment of the market, where they have fallen by 1.5 percentage points during the past year.

Fees are virtually unchanged on last year, which means they are down 3% after adjusting for inflation. At the same time, Colliers says operators have been hit by “marked increases” in payroll costs.

In the nursing sector, margins are also down, albeit by just 0.2 percentage points. In contrast with personal care, fees have risen by 5.2% over the past year in nominal terms and by 1.9% in real terms. This growth helped offset the effect of higher costs and a 0.7 percentage point drop in occupancy.

Adam Lenton, head of healthcare at Colliers, says the sector is facing a range of challenges.

“Demand for quality care provision in care homes, through primary care and the NHS, continues to intensify,” he says.

“This is offset against limited progress with improved facilities, planning regulations, staff recruitment and retention and private investment - and that’s before we make a dent in the Brexit negotiations and the ensuing ramifications of our departure from the EU.”

However, from a real estate investment perspective, Colliers’ chief economist Walter Boettcher says the market is still proving attractive, pointing to the strong performance of listed healthcare companies over the past year.

“Analysis of UK REIT performance since the EU referendum in June 2016 shows that healthcare properties’ performance, as measured by share valuations, were less affected and recovered faster than mainstream UK property asset classes, especially those with exposure to central London,” he says.

“Ex-London assets, and assets secured by long operational income linked to the real economy, look to be generally affected less by Brexit than those with greater exposure to the financial economy. 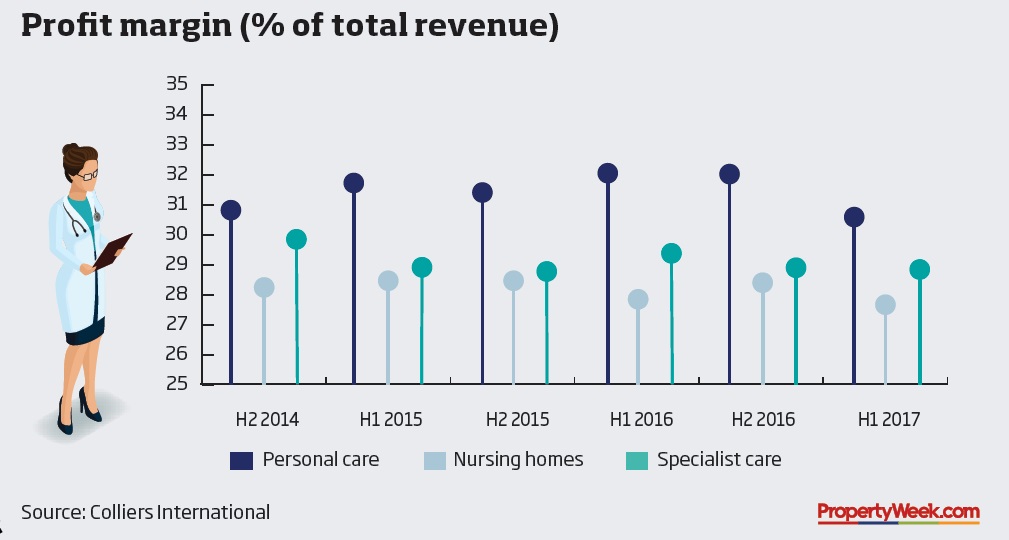