BNP Paribas Real Estate is predicting that average rents will grow faster in the South East office market over the next two years, than in both London and the rest of the UK.

The survey, which distills 48 indicators of development costs and project timescales into a positive or negative score, has consistently recorded a positive score over the past year largely as a result of increasing costs.

Prime rental values have already grown significantly in recent years and in many local markets they have surpassed pre-recession highs.

For example, The Pearce Building in Maidenhead now commands rents of £38.50/sq ft - 10 % above the town's previous peak.

BNP PRE argues that although rents have already hit record levels, there is still room for the South East office market to outperform because of 'structural change' that makes historical comparisons less relevant. "Markets across the South East are undergoing a structural change driven by substantial infrastructure investment, the conversion of obsolete stock through permitted development rights and rejuvenation at an individual town level," says Simon Fitch, director at BNP PRE.

The conversion of obsolete stock into housing through PDR has slashed vacancy rates for secondary property and helped improve the overall quality of available stock. In the Thames Valley market, which has also seen an uptick in development activity, grade-A stock made up 57% of availability at the end of last year, up from 32% in 2010. 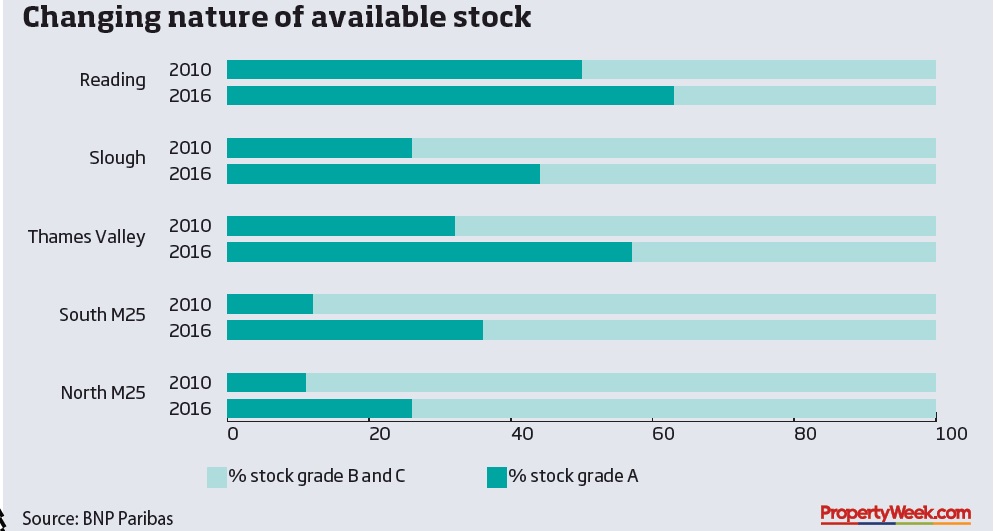 "In Slough and Reading, the development of the Elizabeth line has focused development on the town centre and station area, breaking up the traditional zonal elements of these town centres and encouraging retail and leisure schemes to cohabit with new office buildings and PRS developments", he adds.

In the investment market, foreign and domestic investors have been active buyers and yields have tightened. However, Hugh White, head of national investment at BNP PRE, argues: "There are still attractive risk-adjusted returns to be found by selectively accepting additional levels of risk, while maintaining a disciplined focus on the key drivers of performance. Asset selection is key."