The Brexit shock: in numbers

Close to £15bn was wiped off the value of UK listed real estate firms and housebuilders over the first two days of trading following the UK’s shock vote to leave the EU. 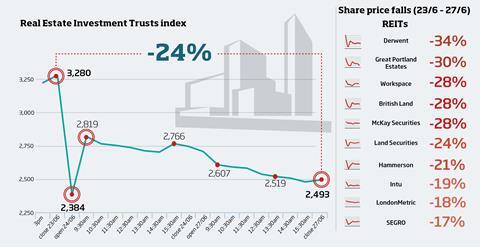 Housebuilders and REITs took a pounding last Friday as the markets opened, with Taylor Wimpey, Persimmon and Berkeley down by around 40% on early trading, as investors took flight amid fears property would suffer should the UK tip into recession.

Among the REITs, Derwent London, Great Portland Estates, Workspace and British Land all saw falls of close to a third, as investors feared the impact a recession - and the possible loss of the City of London’s financial passport - would have on occupier demand in the office sector.

Overall REITs fell 24% over the two days - much worse than the wider markets - while the Household Goods and Home Construction index, which includes housebuilders, fell 14%.

By Tuesday the initial panic had eased, with prices rebounding as the week continued.

Analysts at Liberum said London office REITs would suffer the “greatest downside” as a result of the UK’s decision to leave the EU. “Investment market uncertainty will now continue and their occupier base is at greatest risk of a downturn,” they said.

Among the housebuilders, which over the past two years have benefited from strong demand and government-backed homebuying schemes, Crest Nicholson, Taylor Wimpey and Barratt were the worst hit over the two days of trading, as the top 10 firms collectively shed around £6.9bn in market value.

Despite the battering, analysts said housebuilders were in a strong position to withstand any downturn, with debt levels low and healthy net cash positions.

Jefferies said while the market fundamentals remained strong, with an ongoing shortage of housing, credit availability was the primary concern. 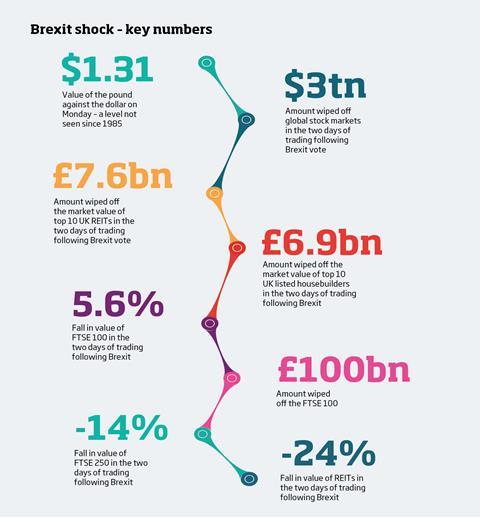