By Simon Creasey and Emanuela Barbiroglio

Which London icon is on top?

Three of London’s most high-profile office towers – the Walkie-Talkie, The Shard and the Cheesegrater – have gone head to head in a lettings battle. 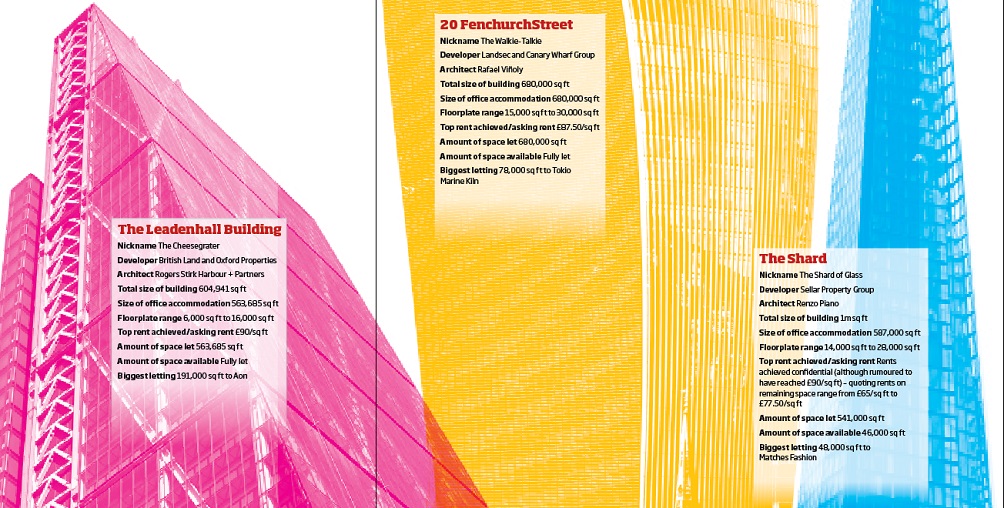 Over the past few years, the London skyline has been transformed by a host of new high-profile skyscrapers. Three of the most eye-catching additions, 20 Fenchurch (known as the Walkie-Talkie), the Leadenhall Building (the Cheesegrater) and The Shard, were delivered around the same time. But which has fared the best in the lettings market?

As Property Week went to press, the Walkie‑Talkie and the Cheesegrater appeared to have stolen a march on The Shard. Both buildings are fully let, whereas The Shard still has around 46,000 sq ft of space to fill.

The Cheesegrater has racked up the single biggest deal, thanks to its 191,000 sq ft letting to Aon in 2011, and if market rumours are to be believed, it has also achieved the highest rent – an eye‑watering City record of £90/sq ft thanks to a 2015 deal with shipping broker Affinity. The building’s co-developers, British Land and Oxford Properties, cashed in their chips in May when they sold it for £1.5bn to CC Land.

On paper, it therefore looks like the Cheesegrater is the outright winner, but unlike The Shard it was built in a location that is a long-established home for blue-chip occupiers, whereas Irvine Sellar took an enormous leap of faith creating a landmark building beside London Bridge train station.

Furthermore, it is rumoured that the Walkie-Talkie – the biggest office building of the three – was fully let a few months before the Cheesegrater announced its final deal in July 2016.

So perhaps a draw is the fairest outcome of this particular head-to-head battle, with all three buildings more than living up to their pre‑delivery hype.

“The three most significant towers delivered in central London in recent years have delivered real performance for their respective landlords,” says Dan Gaunt, partner and head of city agency at Knight Frank.

“Their underlying strength has been in companies being able to relate to their quality and ‘best-in-class’ points of difference and thereby match their corporate aspirations.