Property Week teamed up with Datscha to reveal which companies own the biggest chunks of land in the capital - and the results may raise a few eyebrows. 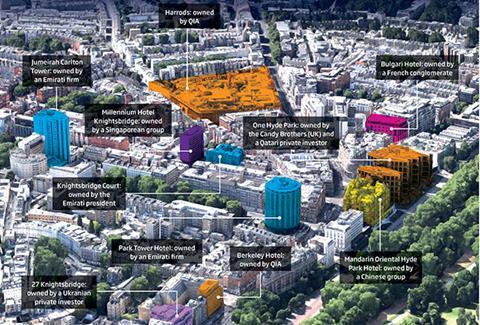 We all know that the ownership of London has changed dramatically over the past few years, but perhaps not quite how much it has changed - and how much of London’s most valuable commercial real estate is now in the hands of overseas investors.

These days, investors from all over the world rub shoulders with the large London estates, public sector bodies and big developers in the prestigious locations of Canary Wharf, Mayfair and Knightsbridge and beyond.

The shift in the balance of ownership is epitomised by the government of Qatar. In less than 10 years, the government of this tiny country, which is roughly the same size as Yorkshire with a population of just 2.5 million people, has bought into some of London’s most iconic schemes including those on the 22.2m sq ft Canary Wharf Group estate, which it now co-owns with Brookfield.

That alone makes it one of the biggest landlords in London, without even counting the other 1.8m sq ft it owns elsewhere in the capital. And there are plenty of lesser-known investors - domestic and international - that have also heard London calling, reveals Datscha’s ranking of the capital’s biggest 100 commercial landlords by square footage owned.

The data, which covers bank or financial adviser nominees where applicable and is drawn from Land Registry, Valuation Office and Companies House data, presents a fascinating insight into the changing profile of the capital’s property market.

The question is: with uncertainty turning into nervousness over Brexit as Theresa May looks set to trigger Article 50, will that call be less audible? Are we on the verge of another shift in the balance of power?

It is difficult to overstate how much overseas interest in the capital has soared over the past decade or so. Since 2005, a large portion of the whopping £80bn invested by the Qatari Investment Authority (QIA), alongside its investment arm, Qatar Holding, and real estate arm, Qatari Diar, has been pocketed by the UK real estate sector.

Former prime minister and former head of the QIA Sheikh Hamad bin Jassim bin Jaber Al-Thani told a national newspaper last year that Qatari investment in the UK to date amounted to £30bn and said London was still the preferred home for money from the QIA and other Qatari investors.

It is not the only part of the region investing big in London. For investors from across the Middle East, “the sky’s the limit when it comes to buying property”, says James Beckham, partner and head of central London investment at Cushman & Wakefield, adding: “The fact is that investors from the region are aggressive in their acquisition strategies and buy above prime yields when possible with every acquisition forming part of a long-term programmatic investment strategy.” 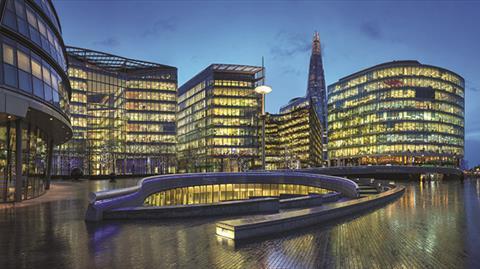 More London: St Martins, the property division of the Kuwaiti government, bought the site in 2013

Many investors, like those from Qatar, like to invest in five key areas: Kensington, Knightsbridge, Mayfair, the City and Canary Wharf. Qatar Holding recently bought four five-star luxury hotels: Claridge’s, the Connaught, the InterContinental on Park Lane and the Berkeley in Knightsbridge, for instance. Qatari Diar, meanwhile, owns the former US Embassy in Grosvenor Square and the QIA owns the Chelsea Barracks site, the Olympic Village - bought in 2011 for £557m with UK property developer Delancey Estates - The Shard and some of the City’s tallest skyscrapers.

More recently, however, it has looked further afield. In 2015, Qatar Holding and Brookfield acquired Canary Wharf for £2.6bn - the biggest investment deal in the UK property market in a decade.

According to property experts, Brexit has failed to dent Qatari investor appetite for London - quite the opposite, thanks to the plunge in the value of sterling. In addition to looking relatively cheap, UK property is still considered a safe haven for overseas cash, adds Raed Hanna, managing director of Mutual Finance, which has advised Qatari investors on a number of deals.

“In Qatar they can get a 50% or 60% return against 5% or 6% here in the UK,” he says. “Nevertheless, the UK is still considered much safer than their own country, where they are too politically exposed.”

That said, since the Canary Wharf deal, Qatari investment volumes in the UK have dropped off slightly, according to Hanna, blaming liquidity issues. But don’t expect these investors to start offloading their UK portfolios any time soon. “Qataris don’t sell. They often say ‘we don’t talk about selling, we talk about consolidation’,” he notes.

Another reason investment volumes from the Middle East have fallen in the past few years is oil prices. In 2015, the price of oil started to fall dramatically and, as a result, Qatar and other ‘petrocracies’ such as Kuwait and Saudi Arabia started to reduce their investments abroad.

However, last November, the Organisation of the Petroleum Exporting Countries (OPEC) agreed a cut in production to boost prices. It was a move that worked instantly with the price of oil increasing by 9%. As a result, you can expect these petrocracy investors to re-enter the market again soon.

True to form, Emirati and Kuwaiti (16th on our list) sovereign wealth funds have all made significant investments in London real estate since 2012.

The government of Kuwait has been particularly aggressive, assembling a sizeable amount of real estate in central London in a short period of time - 3.65m sq ft, according to Datscha’s figures. Many of these properties are owned through the St Martins Property Corporation, which owns the More London estate and through it London City Hall.

Among investors closer to home, one sector that continues to increase its presence in the capital is supermarket and retail groups. The top 100 features three major retailers: Tesco (19th), John Lewis/Waitrose (54th) and Walmart/Asda (89th). According to Datscha’s data, Tesco’s properties in London alone account for more than 3m sq ft.

However, the true dark horses on the list are not retailers - they are self-storage companies. Over the last decade or so, self-storage has come of age and some of the leading operators have built up vast property portfolios - according to the Self Storage Association (SSA), there is currently around 37.6m sq ft of storage space in the UK. As a result, it should not come as a surprise to see Big Yellow (29th) and Shurgard (70th) rank highly on the list.

While self-storage operators are riding high on the list today, in a few years’ time the picture could look very different. There are a number of investors from overseas looking to build a stronger presence. These include the likes of the Mumtalakat Holding Company in Bahrain.

“Their real estate portfolios are beginning to take shape and London will, without doubt, be on the agenda,” says Beckham.

Then, of course, there is the House of Saud. “The Kingdom of Saudi Arabia has generally operated below the radar in terms of global real estate investments,” says an expert on Middle Eastern investment. “If the potential sale of up to 5% of Saudi Aramco, the state-owned oil firm, goes ahead, it will be the world’s largest-ever stock market listing and will in turn give rise to a new Saudi Arabian sovereign wealth fund.

“This new fund will undoubtedly apportion a large part of its investment allocation to global real estate and will likely dwarf the likes of Norges, the Abu Dhabi Investment Authority and the QIA in terms of firepower - it is definitely one to watch over the next few quarters.”

Other experts think the new power players in London property circles could come from even further east.

“The amount of money in Asia is enormous and people on this small island tend to underestimate it,” says Martin Wright, partner at international law firm Mayer Brown.

Late last month, CC Land Holdings, an investment vehicle of Hong Kong property magnate Cheung Chung Kiu, announced the acquisition of the Cheesegrater for £1.15bn. A recent Savills report shows that Chinese investors (both mainland and Hong Kong) accounted for 96% of all West End investment in January 2017. It is a trend that is likely to continue.

Despite the uncertainty presented by Brexit, property experts expect further interest in the London market to come from investors based in Japan, Singapore, South Korea, Germany and South Africa.

“London is unlikely to lose its safe-haven status and, in a world of increasing uncertainty, investors are realising they can no longer afford to wait and see,” says Beckham. “They are instead having to participate in an increasingly competitive real estate market, which is dominated by global capital.”

It is a view shared by Mark Bruno, UK managing director of Datscha, who says: “If Brexit weakens the pound - albeit temporarily, as it already has - the UK remains a clear proposition for countries and companies to have a stakehold within.”

So while the identity and origin of London’s biggest landlords may change, London is still calling - it’s just that different investors are likely to heed that call.

The list has been compiled using data taken from the Land Registry, the Valuation Office and Companies House and includes all properties in the London region (NUTS 1). The list includes nominee companies (such as banks and financial advisers). If the property is owned by a joint venture, Datscha can only connect it to the largest owner (>30%) - so if two companies own 50% each, the database doesn’t match it to an ultimate owner. The company names used in the table are the names of the legal entities registered with the Land Registry.