Why we haven’t heard the last of the US mall

The US retail sector is in better health than recent headlines would suggest.

Toys ‘R’ Us filing for bankruptcy is the latest in a long line of bad news stories about US retail this year. A string of big names including Abercrombie & Fitch, American Apparel and CVS have announced plans to shutter stores, and shares in major department store chains including Macy’s and Kohl’s have plunged amid falling sales and profits.

Retail landlords have not been immune. Shares in publicly traded US retail REITs have fallen and short sellers are targeting the sector, betting on further share price falls. Yet the latest data from the likes of MSCI and CBRE suggests that the outlook for retail property may not be as bad as feared.

Despite what the bankruptcy of Toys ‘R’ Us would suggest, MSCI also estimates that the amount of high-risk income in the US retail sector is 0.3%, which is below office (0.5%). It concludes that “at a high level, US retail leases appear well positioned at mid-year”. 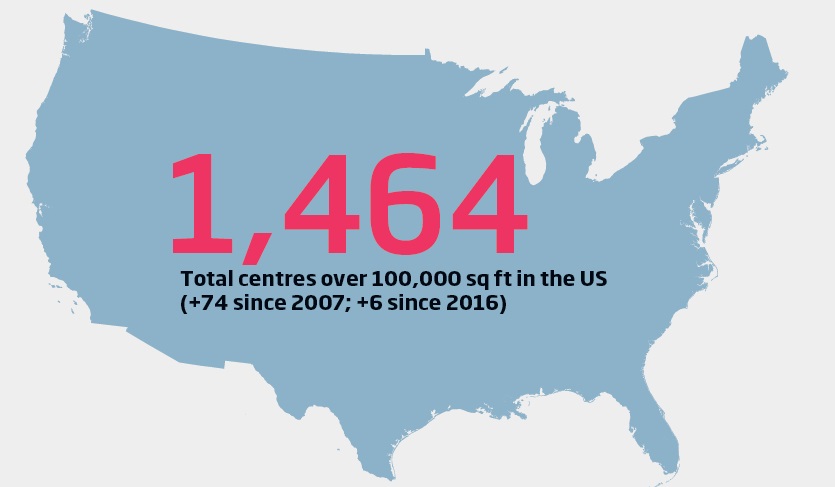 A recent report by CBRE also paints a positive picture of the retail property sector. Having peaked at 10% in the second quarter of 2010, availability rates have been falling steadily since to about 7% at the end of the first quarter of this year. At the same time, average retail rents have registered 13 consecutive quarters of positive year-on-year growth and now stand at their highest level since 2008.

CBRE also downplays the danger posed by the rise of ecommerce in the US. “The impact of internet retail sales growth, although strong, is often vastly overstated. Ecommerce accounts for less than 9% of total sales today and is forecast to not exceed 15% within the next five years.”

However, while overall retail sales are strong, there are pockets of weakness, including electronics and appliance stores as well as department stores, which have been harder hit than most by the rise of ecommerce.

Department stores have traditionally been popular anchor tenants for shopping malls, even more so than in Europe, which is why some have forecast trouble ahead for mall properties. Between 20% and 25% of US malls
are set to close in the next five years, a report by Credit Suisse predicted in June.

In a recent investor presentation, French retail property giant Unibail-Rodamco highlighted other issues with the US mall sector including a potential oversupply of space. The country has 1,602 sq m (17,244 sq ft) of mall space per 1,000 inhabitants, which is more than five times the 291 sq m per 1,000 inhabitants in continental Europe. Europe also had a higher proportion of A-rated malls (56% versus 36%), Unibail-Rodamco said. 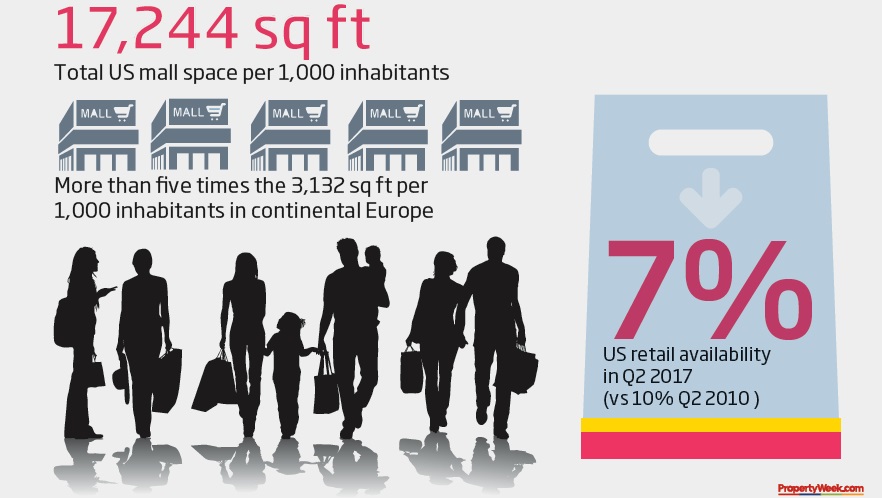 However, Brian Landes, a director at US real estate agency Transwestern, says: “I do not believe that a large number of malls are going to go dark. Large portions of them may be repurposed for other uses, but I don’t think many are going to fully close.

“Those that will close are victims of declining regional economies, changing area demographics or the shopping centre owners’ lack of investment and updates to their centres.”

Since 2007, the number of 100,000 sq ft-plus US malls has increased by 74, according to Transwestern. It looks unlikely that their numbers will continue to grow at this rate but talk of the death of the US mall may be overstated.