Dennis Watson, managing director and head of real estate at Barclays Corporate Banking, is the latest confirmed speaker at RESI 2018.

Watson has been responsible for the bank’s real estate lending activity since 2006 and has more than 30 years’ experience in the sector. His addition to the line-up for the RESI Convention, which takes place on 12-14 September at Celtic Manor in Newport, Wales, comes a week after the global banking group announced that it is backing the finance content stream at the event.

Barclays Bank, which recently announced plans for its first Eagle Lab co-working scheme in Manchester to support SME developers and housebuilders, will be the headline sponsor for the ’Meet Your Future Partner’ session. This exclusive networking opportunity for SME developers, landowners and local authorities will open the event on Wednesday 12 September and feature insights from a range of Homes England representatives – find out how to book your place for this closed session here.

The bank will also sponsor the ‘SMEs and Finance’ stream on Thursday 13 September, including an ‘ask the expert’ session featuring Watson. See the full line-up for these talks, including speakers from Lendinvest, Fruition Properties, Oaknorth Bank and Octopus Property, here. These sessions will cover topics including ‘What is the pathway to growing SME housebuilders of the future?’ and ‘SMEs’ perspectives on being a borrower’.

Click on the links below to find out more about other leading names announced for RESI 2018 so far:

Alongside Watson, Arcadis director Will Waller has also been confirmed as a speaker at RESI 2018. Waller will participate in the ‘masterclasses’ and ‘ask the expert’ sessions focused on construction and delivery. 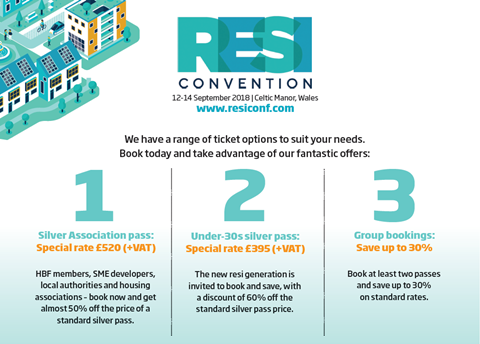