Fantastic five: key speakers to look out for at RESI Convention 2018

Property Week  has lined up the biggest names in property and politics for the all-new RESI Convention 2018, including new housing minister Kit Malthouse, who will deliver his first major industry address at the event. 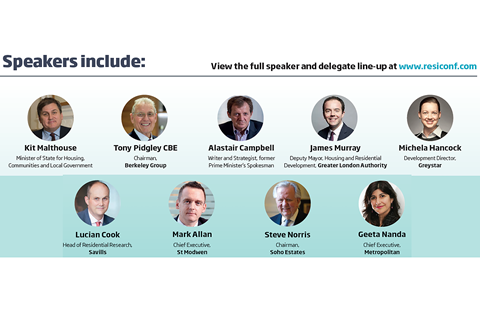 Malthouse will give his political keynote address at 1:45pm on Thursday 13 September, followed by a Q&A with BBC home editor Mark Easton. The MP for North West Hampshire was appointed as the minister of state for housing earlier this summer, replacing Dominic Raab, who left the role after six months to take up the position of secretary of state for exiting the European Union.

Alongside Malthouse, there are a host of other key speakers you can’t afford to miss out on hearing at our most important, engaging and diverse RESI yet, including:

The agenda for RESI, which takes place on 12-14 September at Celtic Manor in Wales, also features high-profile speakers from all areas of the residential sector and beyond, including Lucian Cook, head of residential research at Savills; Mark Allan, chief executive of St Modwen; Steve Norris, chairman of Soho Estates; and Geeta Nanda OBE, chief executive of Metropolitan.

Ahead of the RESI Convention, to give you an insight of what to expect at the event, listen to our resicast to hear speakers Savannah de Savary, founder of Built-ID, and Neal Gemassmer, international vice-president of Yardi, discuss proptech and how investors can profit from emerging trends affecting residential property. See: www.propertyweek.com/events/resicast