Talking the future of planning at #RESIdebate

The residential sector is at an important juncture with continuing planning changes and we’re set to debate the key issues…in 280 characters. Make sure to get on Twitter next Thursday as the head of residential research at Savills, Lucian Cook (@LucianCook), resi experts from the event (@RESIevent) and journalists from Property Week (@propertyweek) host #RESIdebate. 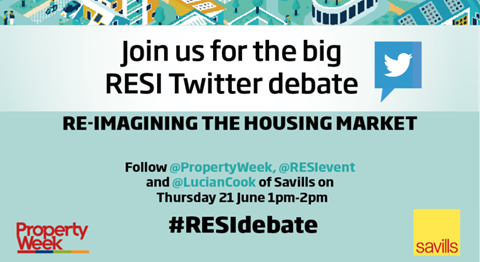 Use #RESIdebate to engage in the debate

The #RESIdebate, which will challenge participants to ’reimagine the housing market’, will take place on 21 June between 1pm and 2pm.

Ahead of the debate, Cook highlighted how there has been a lot of talk about planning in recent months, including the Raynsford Review, but questioned “how much progress has really happened?”. This will be a key topic covered alongside whether build-to-rent is really delivering and what is affordable housing’s role within the wider sector.

Last year’s #RESIdebate generated more than 1.7 million impressions across more than 100 tweets. To join this year’s top-level conversation, all you need to do is tweet your questions using #RESIdebate in advance or on the day.

Join the debate in person at the all-new RESI Convention