For the last three months we have been searching for the most outstanding resi projects of the past decade - and now we can reveal the shortlists.

See the Development of the Decade Award winners here.

First up are five small schemes that punch well above their weight. Then there are the five major projects of 250 units or more; projects that have transformed whole neighbourhoods and improved the image of entire towns and cities.

Size: 215 homes, plus 94,000 sq ft commercial space
Developer: Urban Splash
Lowdown: Considered one of the most important historical military sites in the UK, Royal William Yard was designed by Sir John Rennie and completed in 1835 as a supply depot for the Royal Navy. 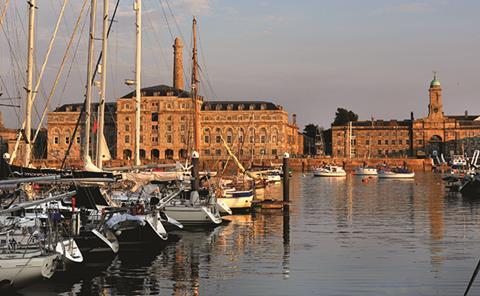 By 1992, however, the yard was redundant, and in 1999 the South West Development Agency, since abolished, appointed Urban Splash as lead developer tasked with bringing the site back into use.

The result is a masterpiece of renovation, with the listed buildings’ exteriors retained and restored to their former glory. At the same time, the interiors were innovatively remodelled to create bright, modern spaces.

Overall, the site has been transformed into a residential-led mixed-use development, including cafés and restaurants, as well as a new home for the University of Plymouth.

“They had been closed to the public for years and weren’t even marked on maps. But with grade I-listed buildings with water and a dock, we knew we could do something special.”

Size: 136 units
Developer: Fizzy Living and Muse
Lowdown: Fizzy Lewisham is private rented sector specialist Fizzy Living’s fifth investment in London, and is seen by many as representing the coming
of age of the build-to-rent market. 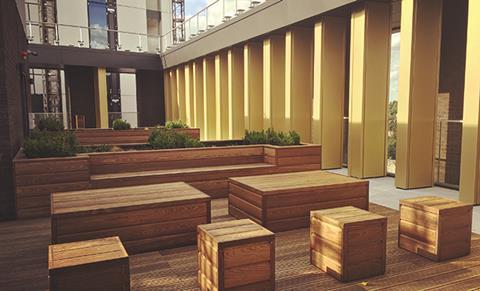 Fizzy acquired the 15-storey building in May 2014, and residents moved in earlier this month.

The building forms part of Muse Development’s £230m Lewisham Gateway scheme, which aims to reunite Lewisham’s national rail and Docklands Light Railway stations with the town centre, and includes up to 800 homes in total. The site is a key regeneration area for the London borough, and the developers hope to reap the benefit of the investment in sale and rental values.

While located in Zone 2, and with connections into London Bridge and Canary Wharf in 10 and 15 minutes respectively, Lewisham boasts residential values that are relatively low compared with similarly central parts of the capital.

The combination of quick connections and potential for uplift in values made the Lewisham Gateway scheme an attractive investment for Fizzy, which designs its projects to appeal to young professionals.

Size: 50 homes
Developer: Regal Homes
Lowdown: Having achieved planning consent for the site in Islington for a previous owner, architect Hawkins\Brown was asked by Regal Homes to create something more ambitious in order to maximise value. The result is the UK’s tallest hybrid cross-laminated timber (CLT) structure, providing 50 homes over 10 storeys. 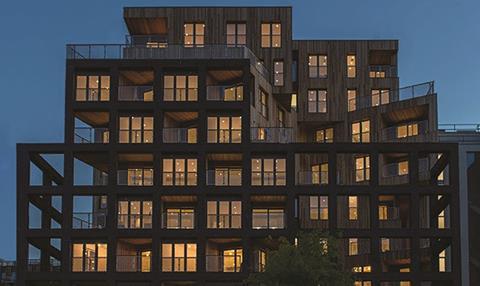 Banyan Wharf’s ‘cruciform’ plan centres on four courtyards with direct visual connections to the city and dual- or even triple-aspect apartments. By twisting the form from floor to floor, the design created terraces with views along Wenlock Basin, allowing morning and evening sun into all apartments. The unusual form also helps reduce residents’ awareness of their neighbours, and gives the building
a more dynamic appearance.

While more widely used elsewhere in the world, CLT is still relatively new to the UK, and has only been used in a handful of projects, mostly only rising to three or four storeys. As a result, Banyan Wharf is seen as a case study into how the material can help minimise the use of concrete and steel and reduce buildings’ carbon footprints.

The combination of innovative design and the use of CLT has led to Hawkins\Brown giving presentations on the project in countries across northern Europe.

Size: 147 homes, plus some ground-floor commercial space
Developer: First Base
Lowdown: Helping regenerate a disused industrial site, Adelaide Wharf was an early example of developers moving in to take advantage of the success of Shoreditch’s creative economy. 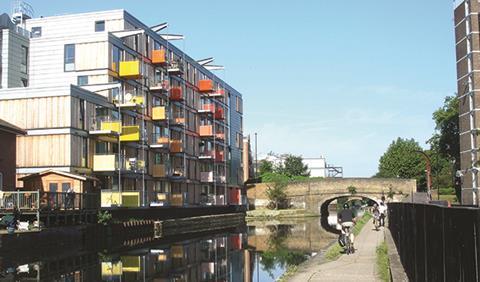 The project, designed by Allford Hall Monaghan Morris, includes homes for key workers and social rent, as well as for private sale - all of which were sold ahead of completion in 2007. A shared garden sits at the heart of the development.

Importantly, Adelaide Wharf was also the first development by First Base, the independent company set up by Stanhope and Lendlease, which has gone on to take the lead on the vast Silvertown development in east London. The project was always intended to be a prototype for future First Base developments, and its influence can be seen in the developer’s later projects, particularly in terms of the efficiency of its design and the use of modern methods of construction.

Adelaide Wharf has won numerous awards, including the National RIBA Award and the government’s Housing Design Award. It has also been featured as an exemplary scheme at the World Architecture Festival, Mipim and the RIBA. 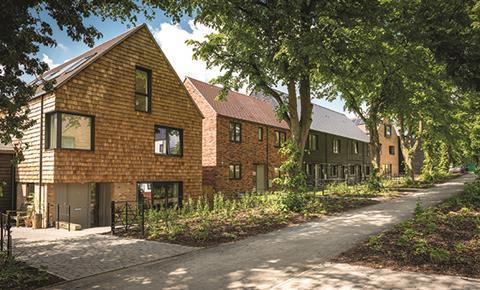 The school selected Hill Residential and PTE through a competitive process in 2008 to deliver a residential development to fund a new junior school and improvements to the existing main school building. Located in a conservation area and next to a listed water tower, the homes here are arranged around courtyards behind a new garden wall, or are set back beyond grassed and planted verges.

Last month The Avenue won a prestigious RIBA National Award. The judges commented: “The Avenue represents the best of new housing developments: a committed client, a skilled architect, and a site with a fabulous mature landscape.”

The project is now in contention for the 2016 Stirling Prize, the winner of which will be announced in October.

Size: 268 homes, plus a community centre, shops, a nursery, gym and new public spaces
Developer: Peabody and Bellway Homes
Lowdown: Pembury Circus is a mixed-tenure development of new homes on the corner of the once notorious Pembury Estate in Hackney. 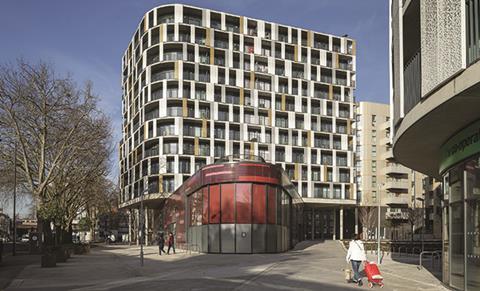 The scheme provides a setting for a successful mixed community - offering homes for older people, a nursery, a large community centre housing management offices for the area, shops, a new public open space and a play area.

Architects Fraser Brown MacKenna tested various density options, working closely with the local planning authority, the Commission for Architecture and Built Environment and Design for London to secure planning consent for a high-quality 12-storey building, maximising the density of the site, and releasing funds for social and community investment.

A new community centre at the foot of the tower provides a focus for social and cultural activities for the whole neighbourhood.

The scheme is Hackney’s largest car-free development. Pedestrian and cycle routes were re-established through the site to connect it with local destinations such as Mare Street, Hackney Downs and local transport hubs.

A variety of design strategies went into creating a high-quality scheme offering a range of community facilities as well as homes. 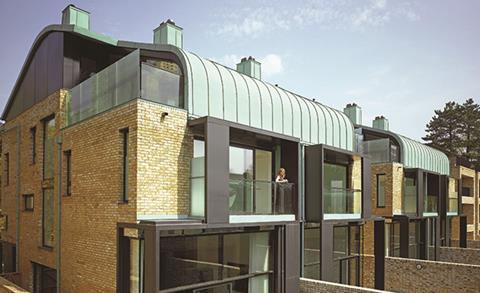 Prior to development, the site of former government offices already had more than 700 existing mature trees. These provided the framework for the masterplan, which was themed around the concept of ‘living in a garden’.

Each of the 378 homes have been designed to overlook a green space, and are in turn linked by a network of footpaths and cycleways. The scheme comprises a mix of houses and apartments, including 30% affordable homes.

“This is high-density housing at its very best,” said the Stirling Prize judges in 2008. “Beautifully thought-through houses are linked by public, semi-public and private but visible spaces, making the development a joy to walk through.”

Size: 5,500 homes, plus commercial space
Developer: Berkeley Homes and Genesis Housing
Lowdown: The Woodberry Down Estate was built out between 1948 and the late 1960s, comprising 42 blocks of council homes that reflected the utopian ideals of the times. 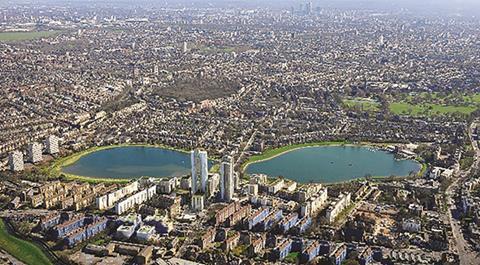 Over the ensuing years, however, the estate fell into physical and social decay. In 2002, Hackney council conducted a structural survey, and concluded that the best course of action was to rebuild the place entirely.

Appointed as preferred developer in 2005, Berkeley began work with the council and Genesis Housing Association on plans for the regeneration of the estate.

When complete, the project will deliver more than 5,500 new homes, of which 41% will be affordable, as well as 15 acres of public open space.

To date, 1,384 homes have been completed, 740 of which are affordable. A further 206 intermediate homes for rent are under construction.

According to Berkeley, the project is providing 470 construction jobs, 30% of which have gone to local people, as well as 42 apprenticeships. It has also created 177 permanent positions.

Size: 2,818 homes, plus retail space and community facilities
Developer: Delancey and Qatari Diar
Lowdown: During the London 2012 Olympic Games, the East Village (then known as the Athletes’ Village) played host to 17,000 athletes from around the world. Since then, the development, which sits to the east of the Olympic Park and north of the Westfield Stratford shopping centre, has been adapted to provide 2,818 homes. 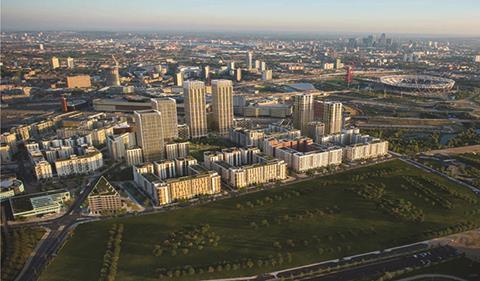 Just over half of the homes (1,439) are privately rented by Get Living London, Delancey and Qatari Diar’s PRS management company, while the rest, comprising a mix of social rent, intermediate rent and shared ownership units, are managed by Triathlon Homes. A further 2,000 homes are in the pipeline.

East Village, combined with the wider Olympic project and Westfield’s investment, has been transformational, having effectively created a brand-new part of modern London.

Size: 800 homes, plus commercial and community space
Developer: New Gorbals Housing Association, Urban Union and Glasgow City Council
Lowdown: In the 1950s and 1960s, Laurieston’s traditional tenements were torn down and replaced by four high-rise towers typical of the era. However, by the mid-nineties, the tower blocks were in a poor condition and the area was designated as one of eight priority areas for regeneration in Glasgow. 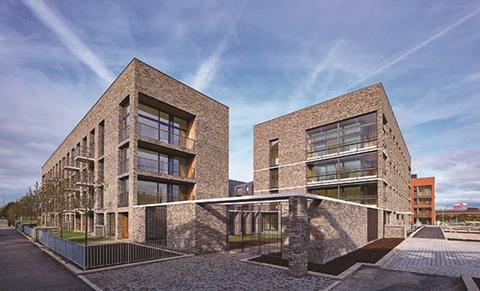 The last of the towers was demolished in May, and the first phase of 201 new homes is now complete, replacing high-rise blocks with a new generation of tenements and a wide range of housing types, including apartments, maisonettes and terraced homes.

All residents affected by the demolition have been offered new homes in the local area and 80% have chosen to remain, according to New Gorbals Housing Association.

The multi-award-winning project is 10 minutes’ walk from the centre of Glasgow. As a result the masterplan prioritises pedestrians over cars, with wide pavements and minimal parking provision. Ultimately a broad avenue, Abbotsford Place, is planned to connect Laurieston with the city centre via a new public park.

Coming up with the shortlists has involved our readers at every stage. First we asked readers to nominate both small (up to 250 units) and large (250 units or more) projects. With advice from industry leaders, we then whittled down the submissions to a longlist of 20 schemes before once again asking for readers’ views.

But participation does not end here. The shortlist will be put to a vote at this year’s RESI: delegates will be the final arbiters on which two projects are declared winners.

Come along to RESI and make your voice heard.