Call Off Duty: our demands

Dear chancellor, the stamp duty regime is hurting the housing market and damaging the economy. If you really want to tackle the housing crisis, you need to Call Off Duty. Here’s how…

As our analysis at the time demonstrated, the changes to stamp duty introduced by the chancellor’s predecessor, George Osborne, are not just punitive to householders and the housing sector, they are counterproductive as far as adding to the government coffers go.

The stark reality is that amid all the uncertainty created by the Brexit vote, the outlook for the housing market, and, critically, for the country’s ability to tackle the housing crisis, is only set to deteriorate further - unless there is a major shake-up of the current stamp duty regime. The question is: what needs to change?

That is where you come in.

Last month, we asked you how you want stamp duty to be reformed. Here we reveal the findings of that survey, assess the merits of the proposals - even the more radical of them - and unveil the five demands that we will be putting to the chancellor on your behalf next month. The goal is to persuade him to make the changes vital to the recovery of the housing market in his Budget this March. Here’s what you have said you want him to do:

Tax breaks for old and young

We asked you how the regime could be revised to help rather than hinder social mobility. You said you would like to see a tax break for first-time buyers to help young people get on to the ladder in the first place. You also want targeted tax breaks for older people who are downsizing or for them to be exempted from paying stamp duty altogether.

On that front, it may turn out we are preaching to the converted. Coincidently, this week there were reports that communities secretary Sajid Javid is considering offering OAPs incentives to downsize, including help with moving costs and exemptions from stamp duty. If he doesn’t introduce such incentives in the housing white paper, we will be putting the case to Hammond to consider them in the Budget.

What we asked you

It is a no-brainer as one respondent to our survey points out: “This would free up large family homes that are currently under-occupied, helping to solve the housing crisis. Homeowners who have paid stamp duty while climbing the ladder should not have to pay twice.” 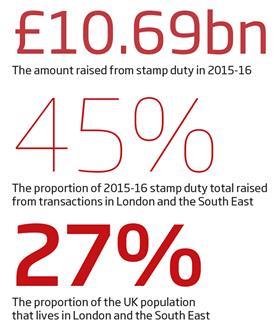 We also asked you whether stamp duty brackets should be revised and whether the rates charged within each bracket are appropriate. Your response was unequivocal: the rates charged are far too high and the higher rates in particular kick in too soon.

While you welcomed the removal of the old ‘slab’ system, you pointed out that the jump from 5% to 10% at £925,000 is both punishing for individuals and damaging to the residential market as a whole.

In much of the UK, homes that fetch upwards of £925,000 are rare, but in London and the South East, many ordinary family homes cost that much. In other words, this is not a tax on mansions.

Unsurprisingly, you want to see thresholds increased and rates at which the tax is levied lowered. There is also a consensus that the 3% surcharge on additional homes should be removed to boost the development of the build-to-rent (BTR) sector and housing numbers in general.

This isn’t just about institutional investment - buy-to-let investors are also seen as critical to getting many developments off the ground. As one reader notes, the policy “is wholly incongruous with the wider housing strategy”. Another comments: “The government says it wants more investment in housing, but this creates the exact opposite effect.”

Research by Oxford Economics has also demonstrated that Treasury receipts from transactions on homes costing more than £1m would have been 10% higher if not for Osborne’s reforms. HM Treasury’s own figures show that income from residential stamp duty dipped between 2014-15 and 2015-16, something that cannot be blamed on the Brexit vote since very few residential deals were abandoned ahead of the referendum, not least because of the widely held belief that the ‘remain’ camp would prevail.

As experts noted before the vote, Osborne’s reforms were already having a detrimental impact on the high end of the market. If the expensive homes are not delivered, neither will the affordable units be delivered - and that has implications all the way down the chain.

As we expected, Property Week readers desperately want to see reform of a system that is stymying the market, discouraging development and preventing the building of homes that the country needs. But many go further. We asked whether there is an alternative to stamp duty and many of you would like to see the abolition of a transactional tax altogether. 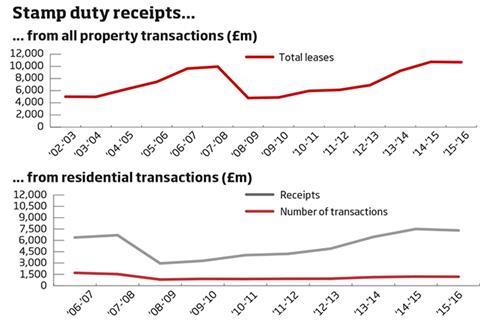 Several think it should be replaced by an annual property levy in much the same way that property taxation works in the US. Under the proposal, council tax would be reformed to reflect the value of the property in which people live, something it doesn’t do at present, not least because, shockingly, the last revaluation in England for council tax purposes was conducted in 1993.

One advantage is that the consumer would no longer have to find thousands of pounds for the privilege of moving house. It would also make it easier for first-time buyers to get on to the housing ladder and would provide a steadier income stream for the government.

Moreover, it would be better for the economy: more people would move more often, with all the inherent benefits for labour mobility and downstream economic activity.

Will Jungman, an American embarking on a career in UK property, wrote a paper on this subject while studying for his MBA at the University of Pennsylvania. He estimates that if the Treasury tax take remains neutral, the average household in the UK would pay an annual property tax of £323 a year: hardly a punitive sum. But attractive as an annual tax may sound, it isn’t realistic politically. As many of you remark: “It will never happen.”

Similarly, we asked whether a regionalised form of stamp duty might make more sense, given the fact that in 2015-16 buyers in London and the South East accounted for 45% of stamp duty payments but represent less than a quarter of the UK’s population. Many respondents back the idea, but many more believe a localised system would be far too complicated and hard to understand.

We agree, which is why, instead of putting forward more radical proposals, we are focusing on ‘win-win’ policy changes that are easily implemented, are beneficial to the property industry and support the government’s wider housing agenda.

A major problem with stamp duty is that it penalises people for moving home and, as the following scenarios demonstrate, the wealthiest can end up paying the least stamp duty over their lifetimes.

Now that we have the detail of what you want the chancellor to do to help the housing industry do its bit to tackle the housing crisis rather than hindering it, there is just one more thing we need from you - your signature on the petition.

In two weeks, we will deliver the petition to No.11 Downing Street. If you want the chancellor to heed your calls for change to the stamp duty regime, make sure your name is on it. 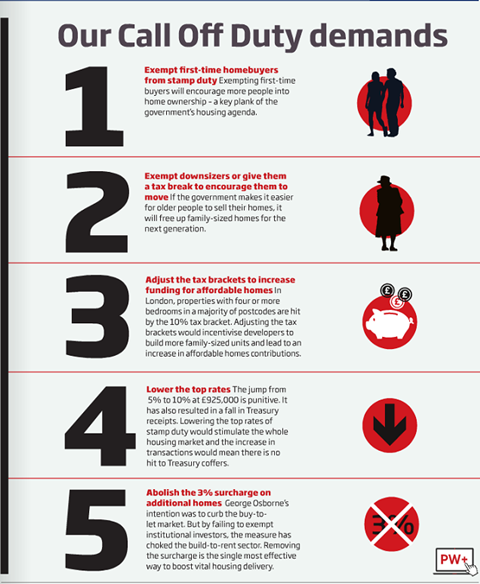