The crisis that has pushed Spain to the brink of financial ruin has given the fighting bull a dubious win of sorts.

Rather than ending their lives at the hands of a matador in the ring, increasing numbers of “toros bravos” are being slaughtered for their meat. A quick exit in an abattoir is seen as somewhat kinder to the prolonged agony that ends with the “estocada” (fatal sword thrust).

Like Spain’s fighting bulls, high street retail in the UK is being put to the sword, and is suffering a long-lingering death.

First, there was the high street in the town centre, and it was all “bueno”. Then we bought cars and got supermarkets and retail warehousing with parking right outside, and that was jolly “conveniente”.

For a while, this growth of space was funded by a growing population with a rising disposable income. But then came the internet and comparison shopping that was “invencible”.

The trouble is that there has been no overall strategic plan for this journey. So now we have the rub. We simply have too much retail space. Even before the internet took a grip, there were large swathes of secondary retail that was occupied by fringe businesses and charity shops. The internet has simply exacerbated this situation.

Take Amazon. It is in the process of increasing its UK warehouse space to 10m sq ft. To put that into perspective, let’s say the average town of 50,000-100,000 people has a shopping centre of around 200,000 sq ft. At 12 metres high, Amazon’s new warehouse is not equivalent to 50 shopping centres — it equals 250. Factor in that internet retail is still growing strongly, and no wonder the high street is suffering from chronic oversupply. 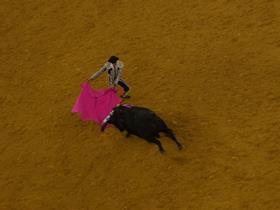 Mary Portas, the government’s high street tsar, has recommended a variety of initiatives, including affordable town centre parking, disincentives for landlords that leave shops empty and “town teams” made up of consumers, landlords, shops and councillors, which would be put in charge
of improving the main shopping areas.

I doubt this is really going to reverse the drift to more empty shops and the shift to out-of-town retail parks. If ministers want high streets to become the breathing heart of the community, they are going to have to replace gesture politics with real policies that can be implemented.

In areas where the oversupply is not too great, the Portas approach might just work. However, where oversupply is insurmountable, you struggle to get investment. These shops in the most part will be occupied by poor covenants, and rental growth will be non-existent because of a permanent supply of vacant space. Donning the “traje de luz” (matador’s sequinned suit), like Portas, is not going to halt the fearful charge of the high street towards its slow death.

Why not allow an assumed change of use between residential, B1 and A1? Why not let natural economics decide the balance between the different uses?

Such a change would take advantage of two social shifts.

A greater number of younger and older people are gravitating towards town centre living. For the young, it is cheaper and provides convenience for work and social lives. For the elderly, it provides convenience for shops, cinemas and restaurants, and eliminates the need for a car. A few areas, such as the West End in London, may need to be exempt from such a change. But for the rest of the country, it would be a breath of fresh air, reinvigorating our town centres.

It is a matter of push and pull: planning pulls people out of town and pushes them away from town centres. To assist this change, planning authorities should not be allowed to hide behind conservation areas and listed buildings without good reason. Our towns should not be a museum to our past, but be a dynamic and constantly evolving urban environment.

So, let’s get rid of the empty shops and replace them with purpose-designed residential schemes for young and old. Without a radical rethink, we can expect to see the high street going the way of the “estocada”.