Price’s words underline the fact that today, anywhere in the capital could be a potential site for residential development. In its Out of Thin Air report published last November, WSP put forward the case for building above the capital’s myriad railway lines. It cites the London Plan’s assertion that at Victoria, there is “significant potential for mixed-use intensification” above and around the station and that a minimum of 1,000 new homes could be provided in the area.

Price says there are currently several examples of this sort of development in the capital. There is Brookfield’s mixed-use Principal Place, which comes complete with the 50-storey Principal Tower, near Liverpool Street station.

East of the City near Tower Bridge, there is IJM Land’s 750,000 sq ft Royal Mint Gardens. The 13-storey, mixed-use development is located over the Docklands Light Railway as it comes out of the tunnel from Bank station. “They have enclosed the DLR, and they have the first core up of the residential building,” says Price.

The other two sites are in west London. One is based at Twickenham station, where Network Rail and Kier Property, working in a joint venture called Solum, have already started on a scheme that offers 115 residential units as well as retail and a completely new station. 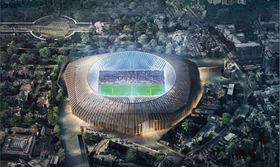 The second is the site of the redevelopment of Chelsea Football Club’s stadium, which will see 500 metres of rail decking laid over the District line and Southern mainline railway to increase the new stadium’s capacity from 40,000 to 60,000 seats.

“Work there will begin next year, with pre-planning started. We’re the engineers on all those apart from Twickenham,” says Price, who adds that Network Rail and TfL have sites with value that they are seeking for this type of development.

Clearly, being above a working railway station throws up not just the obvious issue of noise for those living above it, but also vibration and the effects of train impact loading. Price says this has all been taken into consideration.

“At Royal Mint Gardens, residential is being built on isolation pads to take away the vibration. The acoustics will be dealt with in the mass in the facade and there will be thicker double glazing and wall panels,” he says.

“At Principal Place, trains are deemed to be slow-moving as they approach the station, so they are not an issue. And at Twickenham, they are not isolating it, but there might be some extra acoustic considerations.”

There is also the challenge of building over active railway lines, which requires a very specific engineering approach. Safety is obviously the primary concern in construction. Other issues of working in an operational railway environment include cost and time restrictions.

“You can only work short periods during the night,” says Price. “We come up with engineering solutions that work around constraints. For instance, to install piles we have very short piling rigs that don’t fall over. If they were to fall, they wouldn’t land on the railway.

“We make things of certain sizes that can be delivered by certain cranes from certain locations, which have all been pre-agreed and discussed. It’s important to combine the needs of railway and infrastructure stakeholders with the desires of developers and property teams that are trying to use the land.”

Despite the numerous challenges that building homes and other structures over railway lines presents, Price believes we will see more of this type of construction in the future. “We are going to come to a point where at the time of building the infrastructure, we are building things we might need later: putting the piles in for the over-build even if we don’t put the lid on,” he says.

That would certainly fast-track housing delivery.

Southwark Council has a controversial idea. It wants to house the borough’s residents in underpasses, filthy old laundry rooms and garages.

It is the sort of suggestion that would make most liberal-minded members of society start frothing at the mouth, but before you start to form images of wretched souls living in dark, damp and cramped Dickensian hovels, what the London council is proposing is renovating these empty, unused spaces to create ultra-modern residential units.

These spaces are being used by the council as an innovative way of tackling the borough’s social housing crisis. And that’s not the only potential solution the council has come up with. Another is building eco-friendly units on top of existing council buildings. “We’re looking at every piece of land we have to get the absolute most out of them,” says councillor Mark Williams, Southwark Council cabinet member for regeneration and new homes.

Demolishing council estates and replacing them with high-end, multi-purpose blocks smattered with affordable, renting and private-sale units has been a growing trend over the past few years: think Hackney with Woodberry Down and Greenwich with Kidbrooke Village. These are usually aimed at, or snapped up by, young professionals. But Southwark, despite similar developments at Elephant and Castle, is keen to be a champion of social housing.

Already the capital’s largest and UK’s fourth-largest social landlord, the council owns and maintains 55,700 council properties. Now, Southwark’s greatest challenge is to move 10,000 families from its housing waiting list into the borough’s labyrinth of estates, while fulfilling a promise to build 11,000 new council homes by 2043.

With many of Southwark’s post-war estates in good condition, the council’s ideology is very much about keeping and utilising its buildings.

Through the Hidden Homes agenda, launched in 2010, it has targeted disused property in council estates such as old rent offices, laundries, lofts and underpasses for conversion. Many have already been transformed, including washrooms at Sidmouth House on Lindley Estate, Peckham, and Glebe Estate, Camberwell, which have been converted into a mix of resi units offering up to three bedrooms.

The council is also consulting with residents about building two- and three-bedroom properties in a rarely used pedestrian underpass at Camberwell’s Southampton Way Estate. The council hopes that work will start on site in May next year.

“Every new home we can build – and on some sites we only get one or two units – is a family off the waiting list,” says Williams. 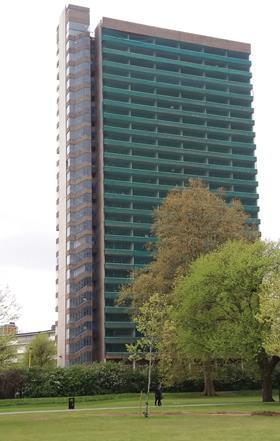 The conversions, all solely for council rent, also stop empty premises being a magnet for anti-social behaviour.

The development will see five extra levels comprising 24 units added to the 26-storey Maydew House tower; 28 units built on top of two low-rise adjacent blocks – Thaxted Court and Damory House; and 87 homes built on the site of the Bede community centre, which will be given its own new site at the base of Maydew House.

Starting next year, and to be completed in 2022, the new homes will be a mix of social and private housing. Although the council’s proposals have been widely welcomed, working on existing, inhabited estates is not without its problems.

“The council has said it will keep the noise to a minimum, but I can’t see how that is going to happen,” says one long-term resident at Thaxted Court. “What I have heard is that the new flats are going to be prefabricated and installed by cranes with steel frames built around them [that will need assembling, causing noise].”

The council would not comment on the method of construction, saying only: “Each regeneration scheme is individual, so it depends on the existing site.”

In response to concerns about noise, Williams adds: “[We] have consulted heavily with all residents to understand the process”.

That is unlikely to appease everyone. But short-term disruption is par for the course on schemes of this ilk and the council believes the long-term gains of unlocking unloved space far outweigh the inconvenience. Time will tell.

Thanks to the growing use of public transport by commuters and evolution of tech such as driverless cars, many car parks – both private multi-storey and at retail schemes – could soon become obsolete.

Given the amount of land car parks typically occupy, it is no wonder they are proving increasingly attractive to developers and housebuilders. Their potential is huge, according to JLL’s 2017 report, Car Parks to Residential: Driving Innovation, which suggests that just under 10,500 car parks in the UK’s towns and cities could accommodate up to 400,000 new homes – enough to house around one million people. The report also states that more than half the car parks identified are in public ownership, under the control of local authorities. 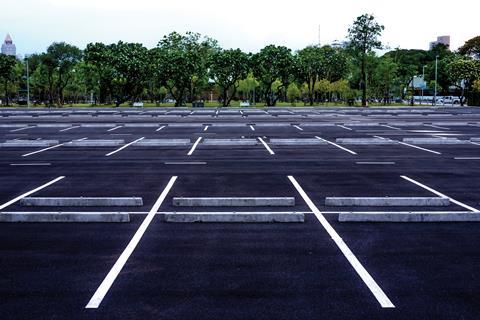 The big supermarket groups such as Sainsbury’s and Tesco are already utilising their out-of-town car parks. However, it is a different story with town-centre car parks. Architecture and design consultancy 3DReid is currently assessing the potential for air-rights development on such sites, which are generally smaller lots that developers are looking to accommodate 50 to 100-plus units on.

“You need to be putting that quantum of residential over there to make it financially viable,” says Graham Hickson-Smith, director at 3DReid. “Any more than that and it starts to get too big in terms of the construction site. Also, putting 2,000 residents in a town centre has too big an impact on the social infrastructure. Up to 200 units is the sweet spot.”

Hickson-Smith believes the greatest potential is in towns in Greater London and possibly beyond. “From a cost perspective, Zones 1 and 2 are priced out for most residential development,” he says. “Zones 3, 4 and 5 are more viable. If you go beyond the M25, [historically] values were not there, but that is changing. More developers are pushing further into the home counties – Bedford, Stevenage, Luton and Basildon – where values have gone up.”

He adds that multi-storey car parks and in-town retail assets both have scope for air rights development. “The host building can change and the opportunity in terms of the amount of resi you can get over the top will also change,” he says. “But some host uses are better than others”.

And for those who need homes any use is better than none.