Indoor farming: on to pastures new

In the drive for sustainability, new operators are looking to indoor farming to bring food closer to consumers. 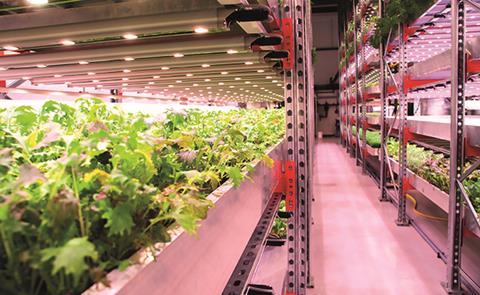 Asked to imagine a farm, most people will think of vast green fields filled with neat lines of crops, grazing animals and a tractor trundling along in the distance.

It’s an idyllic visualisation that would be shattered if you were told that the farm were, in fact, on an industrial estate on the edge of a major conurbation.

Say hello to indoor - or vertical - farming, an emerging sector that aims to produce food sustainably, without sunlight or soil and, crucially, close to the retailers that will sell it and the consumers who will eat it.

It is a concept still very much in its infancy, but if this new farming method takes hold, warehouse space will be high on the shopping lists of these new operators. So what is indoor farming? And what are operators’ requirements?

Indoor farming is sustainable and uses less transport. Those who are doing it now are the forward-thinking food producers - David Binks, Cushman & Wakefield

“This is very much a new, emerging sector,” says David Binks, a partner in the industrial team at Cushman & Wakefield.

“The thinking driving this trend is to move food production closer to the source of customers. It’s sustainable and uses less transport, which is a very positive thing. Those who are doing it now are the forward-thinking food producers.”

GrowUp Urban Farms is one such operator.

A year ago it opened Unit84, an indoor farm in an industrial warehouse in Beckton, east London, that had previously lain vacant for 18 months. It claims it is the UK’s first aquaponic, vertical farm.

The farm combines two well-established farming practices: aquaculture, a method of farming fish, and hydroponics, whereby plants are grown in a nutrient solution without soil. It is a low-energy, low-water-use way of growing food that is especially suited to high-density urban agriculture.

“I set up GrowUp with COO and co-founder Tom Webster four years ago,” Hofman explains. “We have different career backgrounds - he was a sustainability consultant for an engineering firm and I was a strategy consultant - but we were both interested in making sustainable urban food production commercially viable.”

The pair took over the warehouse at London Industrial Park in May 2015 and launched after a comprehensive six-month fit-out process.

“Our 600 sq m [6,500 sq ft] hydro room alone provides 8,000 sq m of growing space because we’re able to grow up as well as along,” says Hofman. “And because it isn’t dependent on environmental and climate factors, we can produce salads of consistent quality 365 days a year.”

Now that Unit84 is fully up and running, Hofman and Webster are looking ahead to their next project - a considerably larger farm for which the firm will soon work up a design that will enable it to make even more efficient use of space. This next farm will be the blueprint for a model that can be rolled out to many different locations on a franchise basis. 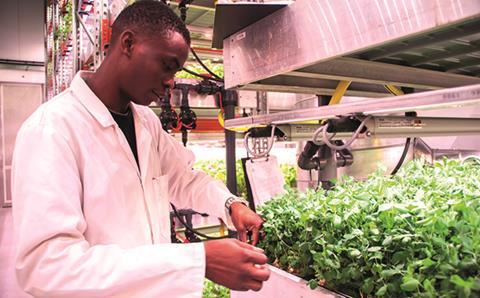 Hofman says a standard warehouse is the ideal place for vertical farming and lists requirements similar to those of light industry, including locations within easy reach of customers - GrowUp distributes all of its produce itself using electric vehicles - and with good access and packing space.

“From what I’ve seen, read and heard, these operators need decent utility access - predominantly renewable energy to power the artificial lights that are used in place of sunlight - although they require very little water, significantly less than a traditional farm,” says Binks. “They need to be heated and cooled efficiently. And because they use a degree of technology to support the growing methods, that may be a consideration in their requirements.”

Binks believes old multi-level industrial buildings are well suited to vertical farming. “Former textile factories and other such buildings built in the early 1900s on the outskirts of towns and therefore in close proximity to the customer base would probably work well,” he says. “If they are at a cost base that is affordable for these operators, they could potentially bring very old, dilapidated buildings that have been redundant for years back into use.”

However, he highlights that residential developers are often at the front of the queue for these types of buildings and, as such, indoor farming operators could struggle to secure buildings.

“It’s a challenge and it could be a barrier to entry,” he says. “But where they find the right building in the right location that hasn’t been earmarked for residential use, I don’t see why they couldn’t bring it forward. They might also occupy fairly new industrial buildings with mezzanines.” 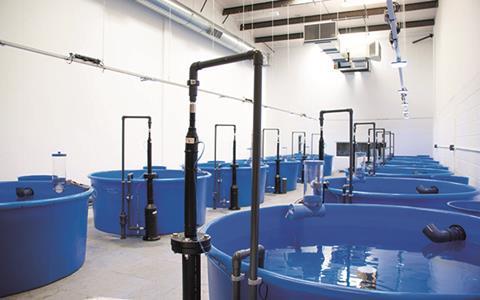 New buildings are a consideration for GrowUp. Hofman explains that they could convert an old warehouse, depending on the age and quality of the building, but the retrofitting costs are huge, so it could look to partner with developers to create the right space for its specific needs from scratch. And it isn’t only industrial space that is on GrowUp’s shopping list. It could also operate from big-box units on retail parks.

“At a time when businesses are becoming increasingly streamlined operationally and focusing on last-mile delivery, huge out-of-town retail spaces could become vacant,” says Hofman. “Landlords are already looking for alternative uses - we could be it.”

We are utilising ways of growing food that make sense commercially and environmentally - Kate Hofman, GrowUp

When it comes to planning, the sustainability and community benefits of indoor farming are such that Binks believes local authorities would be in favour of vertical farming uses. However, there is a caveat.

“There is some debate as to how employment generative they are,” he says.

“If they use automatic feeding systems, there might only be a need for a handful of year-round on-site staff and a short-term need for extra staff during the picking season. Operators may have to persuade councils that it’s a good thing for their boroughs.”

Planning isn’t the only potential hurdle that may need to be overcome. While it can be done profitably, Binks says this new farming technique is so innovative that thus far it is only private investors who are investing in it. 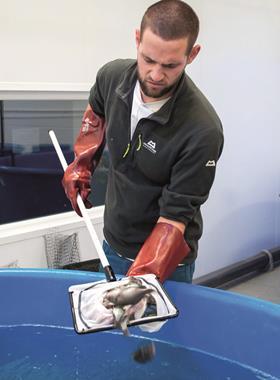 Aquaculture is a method of farming fish -Source: Mandy Zammit

“There is a question mark over the covenant strength of these types of occupiers,” he explains. “For now, the sector is so new that landlords and developers aren’t considering this to be a new or potential major occupier category. But perhaps they ought to be - indoor farming is flying under the radar.” He adds that the landed estates might pursue these tenants in a bid to showcase a forward-thinking approach.

As for the future, a number of factors could accelerate the growth of these types of farm, as Hofman explains: “Brexit could have an impact on imported foods and imported labour. Couple that with climate changes affecting farming in countries that supply the UK with much of its produce, including floods in Spain and droughts in California, and a growing desire by retailers to sell and consumers to eat locally produced food, and I see this [indoor farming] as the answer. We are utilising ways of growing food that make sense environmentally and commercially - it is an attractive investment.”

There may be questions over the viability of indoor farming but, in a changing world, its future could well be bright. This new method of food production has not yet piqued the interest of industrial landlords or institutional investors - but perhaps now is the time to take notice of a trend that is likely to grow.