These are strange times for London’s prime residential market.

After years of double-digit growth, the market has flattened out. Buyers are becoming scarce and agents are having to work much harder for sales.

The reasons for the slowdown have now been well rehearsed. A series of hikes in stamp duty, most notably the chancellor’s move in December 2014 to scrap the tax’s ‘slab’ structure, have driven up transaction costs at the top of the market.

Meanwhile, stock market turmoil and the ‘lower for longer’ oil price era has led to a sense of growing global economic uncertainty, which is spooking investors.

Overseas buyers have also been hit by currency fluctuations, along with domestic economic and political instability in their home countries.

When you add to this mix the uncertainty generated by the UK’s possible exit from the EU, you have a cocktail of risks that has buyers and sellers alike hesitant to make their move.

But how bad is the slowdown? Are the doom-mongers right to say London is on the brink of a housing crash - or are we just witnessing a natural correction; the kind of periodic flat spot that London often experiences?

Data compiled by London resi specialist LonRes for Property Week gives some insight into the health of the market. 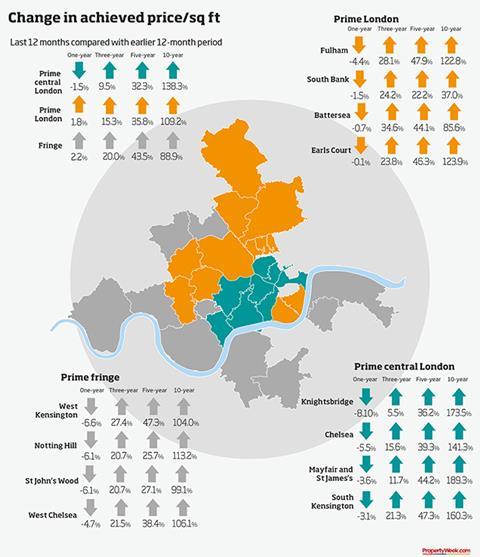 Perhaps most strikingly, the data, which splits prime London into three distinct geographic areas - prime central, prime and prime fringe - shows the extent of the fall in transaction volumes.

In prime central London, transactions in the first quarter of 2016 were down 31.3% on their peak two years earlier and down 12.6% year on year. In prime London, they have fallen 25% since the peak and 5.7% year on year, while the prime fringe area has fared better, with a drop of 10% over the past two years and a rise of 8% year on year.

“People are sitting on their hands - they’re watching and waiting,” says Marcus Dixon, head of research at LonRes.

“The stamp duty at the upper end is a lot to pay, so they’re staying put and doing loft conversions instead.”

As the market has cooled, prices have flattened and are now going backwards. The average achieved price in prime central London rose 24.6% in the two years to the Q1 2014 peak, but has fallen 4.1% since.

Prices in Knightsbridge, which grew a phenomenal 174% in 10 years, have fallen by 8.1% over the past 12 months. Chelsea, Mayfair and South Kensington also all posted falls. Prime and prime fringe have yet to head into negative territory, but growth rates of 1.8% and 2.2% are anaemic when compared with the past three-, five- and 10-year periods. 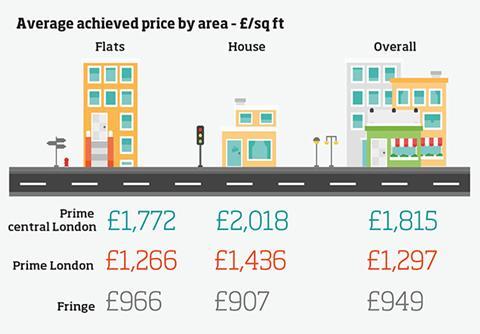 “The falls are not precipitous but when you compare it with the phenomenal growth in recent years it’s a significant slowdown,” says Dixon, adding that in some areas, at the very top of the market, there have been falls of up to 20% since the 2014 peak. “The biggest drops are in the ‘over £2m’ and ‘over £5m’ brackets. But even then the falls are only taking us back to end-of-2012 levels, because prices shot up so quickly.”

But could things get worse? Possibly, not least because of the great unknown: the EU referendum. “If it’s a yes to leave Europe, there will be a period of uncertainty and that will make it much harder for people to sell,” says Dixon.

“So you could see prices dip again. But at the moment, rather than a significant fall in prices it seems that the market is just grinding to a halt. I think it’s more likely that we will just see more of the same - relatively flat growth in prices and low levels of transactions.”

While Savills is forecasting zero growth in prime London resi prices this year, Lucian Cook, director of Savills residential research, says this forecast is based on the assumption that the UK says no to Brexit.

“If we vote to remain, we may see a bounce-back in the second half of the year, but this will be tempered by the high transactions costs,” he says. “But Brexit is the big unknown.”

Where things could become more distressed is in the new-build market. JLL is forecasting a 3% fall in prices for central London new-build this year, with prices not forecast to rise again until 2018. Mike Prew, analyst at Jefferies, expects new apartments in high-rise towers to shed a fifth of their value as oversupply hits a softening market.

This is a view shared by analyst Alastair Stewart, who warns that towers in clusters, with a large proportion of “undifferentiated” two-bed flats designed for Asian retail investors, are likely to struggle. 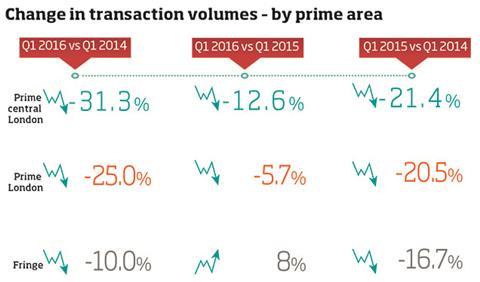 Last month, British Land warned that it was struggling to sell luxury flats - and that its Hempel scheme in Bayswater had been particularly badly hit by the slowdown. There was also an admission by Capco earlier in the year that sales at its Lillie Square scheme in west London had all but ground to a halt. The developer cited “challenging conditions” due to increasing supply.

However, it is at Nine Elms, where around 20,000 apartments are in the pipeline, that prices are expected to fall most sharply. Adrian Owen, head of resi at BNP Paribas Real Estate, says the average for new-build in the area of £1,500/sq ft is likely to come down to £1,200/sq ft - a drop of 20%.

He says there will be pockets of London, such as Midtown, that continue to perform strongly, but other areas that are oversupplied will suffer. “It’s difficult to generalise as there are markets within markets in London, but certainly there are some areas like Nine Elms with significant oversupply.”

The new-build market is at a “crossroads”, believes Mark Farmer, director of Cast Consultancy. “It’s a strange market. There’s a lot of nervousness creeping in as to whether the purchases on some of these schemes that have been sold off-plan will complete. The acid test is coming and the question is whether we will see people walking away from their deposits.”

With buyers becoming scarce, developers are beginning to offer incentives to shift unsold units, including the payment of stamp duty and discounts for bulk transactions, particularly to institutions. 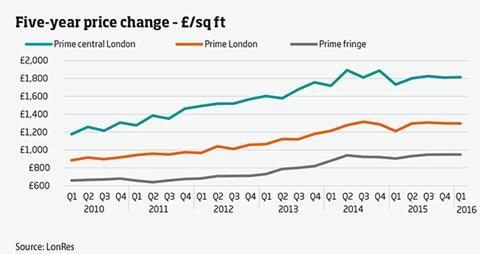 “They’re packaging units up and selling them at a discount to the list price,” says Farmer.

“That’s already starting to happen, and when that becomes apparent to individual purchasers they won’t want to pay the list price and you will start to see more of a price correction.”

However, Farmer does not expect a crash because he thinks the slowdown will prevent projects from coming forward.

“Developers need to sell 30%-40% of their scheme off-plan to get finance, so if there’s any nervousness about pre-sales activity that will in itself prevent new projects and additional phases on existing projects from starting,” he says. 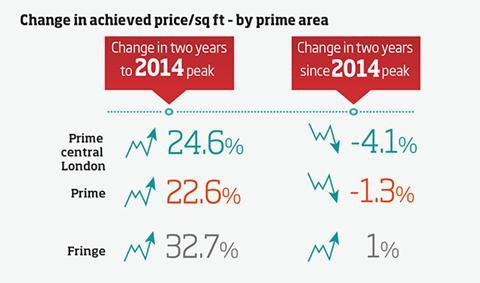 “That will be a check on the market - it won’t cause an oversupply because these schemes are phased and they won’t get started.”

London’s prime resi market has undoubtedly slowed, and may be grinding to halt. But the market remains hopeful that the recent turmoil is a correction, rather than the precursor to a crash.