Forget trivial issues like scarcity of affordable housing and fears that foreign companies are ‘buying up’ New York City. 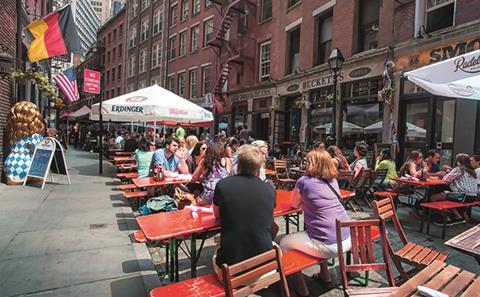 The city’s most impassioned real estate debate is over restaurants. Many New Yorkers insist that high rent is destroying the restaurant business.

GrubStreet.com, the respected food site of widely-read New York Magazine, recently proclaimed: “Lately it feels like every restaurant in Manhattan is closing - or will be soon - because of real estate issues.” Meanwhile, anti-development politicians and trade groups such as the New York State Restaurant Association routinely warn of a ‘crisis’.

Yet there is clear evidence that landlords and developers are the best friends eateries ever had, not that anyone wants to believe it.

For all the city’s world-capital stature, built in large part on enlightened development, the idea of the landlord-as-villain is hard-wired into the local mindset. “The rent is too damn high” became a war cry even after the activist who coined it was later found to be living in a rent-stabilised, one-bedroom apartment costing all of $872 (£672) a month.

The closing last year of Ouest, a 200-seat American restaurant on the Upper West Side that opened in 2001, was framed by the press as exhibit number one of rent gouging. But the owner’s claim that he couldn’t afford a hike from $30,000 a month to $46,000 - merely an asking rent - rang hollow. Such an increase over 15 years is hardly excessive for a place that opened to three-star reviews and a strong local following. What truly doomed Ouest was a fall-off in quality, erratic menu changes and inattention on the part of chef/owner Tom Valenti.

Two years ago, mega-restaurateur Danny Meyer wrote in the New York Times that he would likely have to close or move his famously popular Union Square Cafe “unless we’re able to complete a Hail Mary pass with our landlord”, who planned to triple the rent when its lease expired at the end of 2015. While allowing that “there are neither victims nor villains”, Meyer said: “As a city, we’ve got a problem.” He suggested New York needed “something like London’s rent assessment panel” to “prevent rapid erosion of the city’s neighbourhood fabric.”

Pundits foresaw all of Manhattan turning into a ‘monstrous mall’. Celebrity chef Bobby Flay warned that greedy landlords are “going to drive away all the people and places that make New York interesting.”

It’s true that high-end restaurateurs faced a crisis in the years following the 2008 market crash. Capital for investment and construction dried up, making it temporarily impossible to launch major new projects and today, a stroller on Bleecker Street in the West Village finds plentiful ‘for rent’ signs where cafés once stood. Meanwhile, at the lower-priced end of the restaurant spectrum, there’s no question that smaller, often family-run Mexican, Asian and Middle Eastern spots are frequently priced out when leases expire.

But things can’t have been that bad in 2014. Flay’s warning came just months after he launched Gato, a huge, new Spanish brasserie in a 100-year-old downtown former warehouse where no restaurant had previously existed.

And despite Meyer’s dire scenario, the Union Square Cafe melodrama had a happy ending. He found a larger home for his landmark eatery a few blocks away on Park Avenue South, where it will open this month. Union Square Cafe’s former location on East 16th Street was in turn leased to TsuruTonTan, a well-regarded udon noodle chain from Tokyo and Osaka that has long wanted to open in the US.

Will TsuruTonTan draw enough traffic to pay the rent? Lines have stretched around the block since it opened two weeks ago.

The only way to evaluate the situation is to count and despite moans over the demise of every ‘institution’ - ie any kebab joint more than 10 years old - the fact is that New York City has many more places to eat than ever.

Two years ago, the last time such a survey was done, the Wall Street Journal definitively found a decade-long boom in new restaurant creation, citing data from city agencies. The number of places grew 6% in Manhattan and 10% in Brooklyn between 2009 and 2014.

The phenomenon is obvious to anyone out for a stroll. Restaurants at every price point proliferate in neighbourhoods that once had few to speak of - including the Lower East Side, Flatiron, the Meatpacking District, the Wall Street area, central Harlem and myriad Brooklyn districts. Openings so far outnumber closings that restaurant critics and blogs can’t keep up with them.

Yes, rents are an issue in some parts of the city. But owners should not be surprised that leases signed 10 or 15 years ago for $75/sq ft will cost $250/sq ft to renew and not even the ability to pay 2016 rents can save a restaurateur if their building is to be demolished - which spelled the end of Keith McNally’s insanely popular Meatpacking District bistro Pastis.

If there is a ‘crisis’, it’s mostly due to changes unrelated to real estate, such as rising food costs, and - ironically - competition from all the new places to eat, of which the doom-and-gloom crowd seem unaware.

What most has owners running scared are recently legislated minimum wage increases that include a hike for tipped workers from as low as $4.90 an hour to $7.50. The bottom line impact has restaurants scrambling. Some, including Meyer, are switching to a no-tipping format - still uncommon in New York - while others are simply laying workers off.

I’ve long promoted the politically incorrect argument that the real estate industry is the restaurant industry’s best friend. They’re so intertwined, it’s impossible to imagine one without the other. Scores of New York’s best-loved restaurants were entirely or largely creations of developers and landlords, among them The Four Seasons, Le Bernardin, Jean-Georges, Masa, Casa Lever and Aureole. All were installed in new buildings where owners wanted prestigious dining destinations to enhance their projects’ value.

Such collaborations may combine a lease with revenue- or profit-sharing. Others are strictly management contracts. Often the property owner will pay entirely or partly for a build-out that might have cost the restaurateur millions of dollars at a freestanding address. Starr, for example, probably could not have afforded to build his spectacularly designed projects The Clocktower in the Edition by Marriott Hotels and Le Coucou in new hotel 11 Howard, at freestanding locations on his own.

Few new office or residential developments, or older properties ‘repositioned’ for a new age, dare not have at least one serious new restaurant. L&L Holding Company lured the owner and chef of three-Michelin-star Eleven Madison Park to create another top-end eatery at redesigned 425 Park Avenue. Other prestigious eateries have been signed at the Empire State Building, the Durst Organization’s dramatic Via 57 ‘pyramid’ and even to a once-unused corner of Grand Central Terminal.

But who wants the facts to get in the way of a good story? Although there seems no limit to how many restaurants New York can support, the idea that landlords are killing the business persists - and presumably will continue to until every address in town is a place to eat.