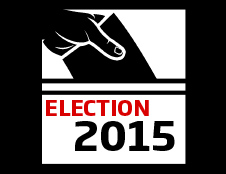 Normally when politics and property collide it is a matter of legislation; of changes to tax or planning law. However, as Property Week’s analysis of the publicly available figures makes clear, it isn’t just that property firms are significant contributors to party coffers, but also that many politicians derive significant income from property.

In a bid to better understand the relationship between two such different professions, we mined the data contained in both the Electoral Commission’s record of who has given what to which political party, as well as the Register of Members Interests. The result isn’t exhaustive (see methodology below), but the analysis does provide some striking findings – as well some interesting quirks. 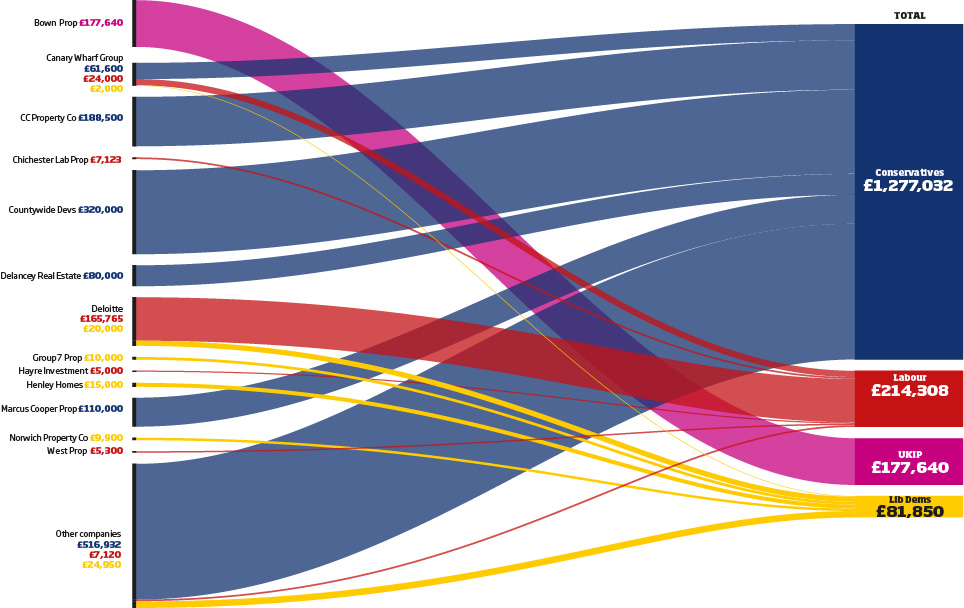 To take the party donations first, it is unsurprising that the Conservatives derive the greatest benefit from the property industry’s largesse. In total, we identified round £1,277,000 of donations to the Tories in the last session of the 2010–2015 parliament, more than five times the amount given to Labour. While still no doubt much appreciated, the sums given to the Liberal Democrats (around £82,000) and UKIP (£178,000) are minimal.

The median donation given to the Conservatives came in at £10,000, but the party benefited from some big-ticket contributions, including a total of £320,000 from Countywide Developments (not to be confused with Countrywide). Higher-profile property firms also made substantial donations to the party, with Delancey Real Estate Asset Management contributing £80,000 and Canary Wharf £61,600. 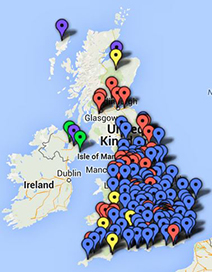 We could only identify eight firms that donated to Labour and in cash terms the list is dominated by a single firm: Deloitte at £166,000, although Deloitte says its payment was in the form of staff delegated to the party’s office and that it is not its policy to give cash donations. Deloitte similarly contributed to the Liberal Democrats – but not the Tories – although like Canary Wharf the amount (£20,000) is token.

UKIP’s donations are also worth a mention. The party received just shy of £178,000, all of which was contributed by a single donor: Bown Properties. If that isn’t remarkable enough, it turns out that Bown, registered in Gravesend, Kent – UKIP’s heartland – has a net worth of just £253,039. The firm’s two directors presumably have serious issues with the UK’s membership of the European Union.

The Register of Members Interests also makes for compelling reading. Of the 650 MPs in the House of Commons, some 185 hold interests in property, be it as landlords, shared ownership, paid employment or being in receipt of sponsorship.

Most remarkably, it transpires that a quarter of all MPs in the Commons currently derive income as landlords, of which the vast majority are residential landlords. Of those, most let properties in London, ranging from single-bedroom properties to significant portfolios. A handful, however, are clearly members of the landed gentry (almost exclusively Conservatives), with rural land holdings from the Home Counties to the Highlands.

Then there are the more unusual interests. Labour’s Lyn Brown records that she derives an income from a commercial property in Munich, while the Tories’ Mark Spencer owns a garden centre. Another Conservative, James Clappison, lists a cricket pitch as a source of income.

While the vast majority of MPs’ property-derived income comes from direct investments, a modest few (so far as we could tell) also engage in consultancy work. For instance, Tory Stewart Jackson – a shadow planning and regeneration minister prior to the 2010 election – received £3,750 from LSL Land & New Homes for “advice on housing, planning and regeneration”.

The standout fee-earner, however, has to be David ‘two brains’ Willetts, who received £55,001 to £60,000 (his entry is tantalisingly vague) for 20 hours’ work on the Silvertown project in east London. His advice, he notes, was on “possible occupants… from the global education and research community”. Fitting, as Willetts was the minister of state for universities and science until the 2014 reshuffle.

Unsurprisingly, it turns out that property companies have an interest, both intellectual and material, in politics. But it also turns out that many politicians have more than an academic interest in property. Whether or not the connection has an influence on legislation… well, to quote House of Cards: “You might very well think that, but we couldn’t possibly comment.”

The member for the Cotswolds records that he receives “rental income from agricultural holdings in Norfolk”. His entry also shows that he owns “various let properties in London” and has an interest in Salisbury Road Development, which owns a property in Christchurch, Dorset. He is a fellow of the RICS

The Baghdad born MP for Stratford-upon-Avon owns residential property and 31 acres of land in Warwickshire with stables run as a livery yard. He also owns a residential buy-to-let in London divided into three flats.

First elected as a Conservative MP in 1997, the St Helens and Whiston MP crossed the floor in 1999. He also has a habit of crossing continents, with properties in France, New York State and the West Indies.

The former planning and construction minister doesn’t derive an income from properties he owns, nor does he own shares in property firms or receive sponsorship. But he is active in the industry. His register notes he is a board member of housing company Pocket, honorary vice chairman of the Construction Industry Council and chairman of Triathlon Homes.

Information about the property interests of individual MPs was taken during a trawl of the most recent register of interest for members of parliament. In terms of property ownership, only MPs who declared that they derived revenue from their property holdings were listed.

Donations made to political parties were taken from information held by the Electoral Commission. The information was accumulated using key word searches. We did not search for donations made by individuals. In both instances there may be some omissions. All of the data is available in open format from www.parliament.uk and www.electoralcommission.org.uk 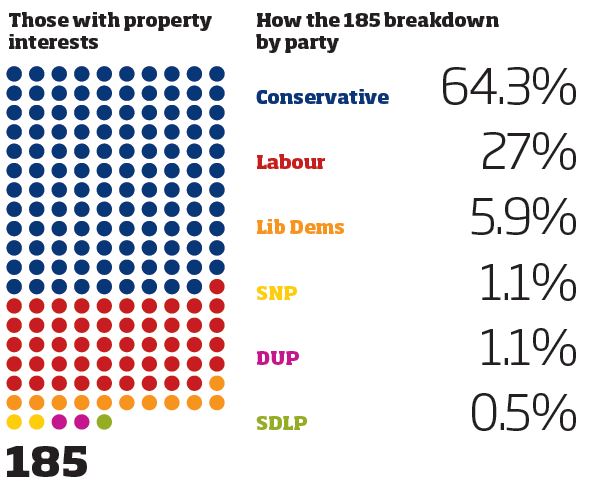 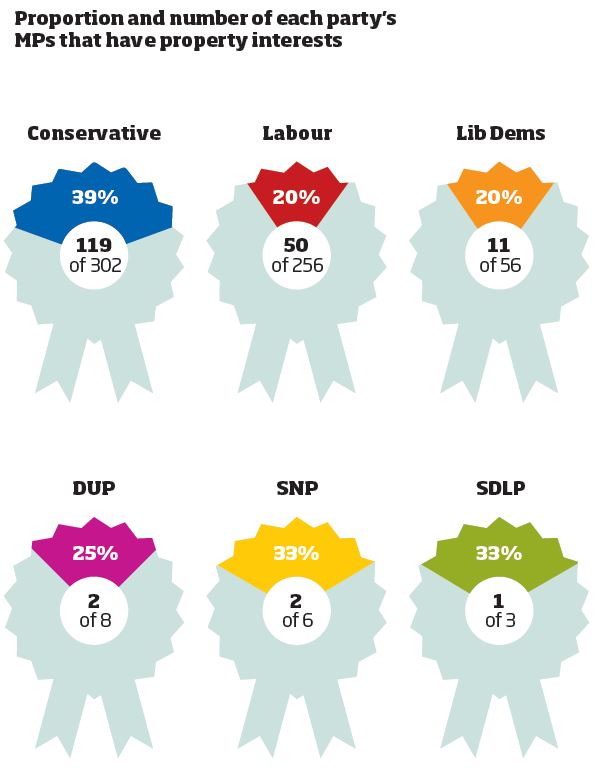 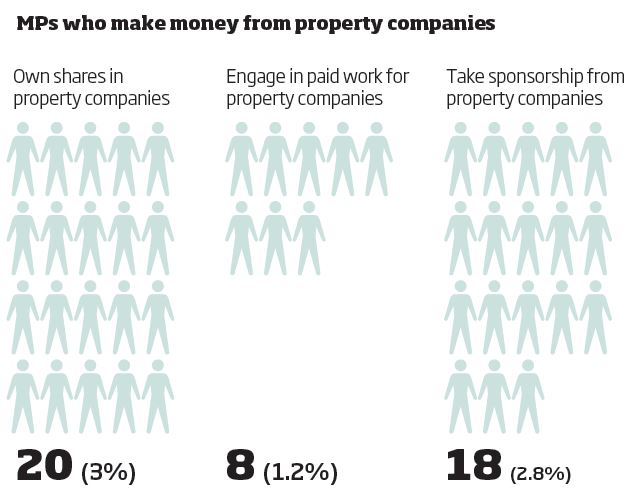 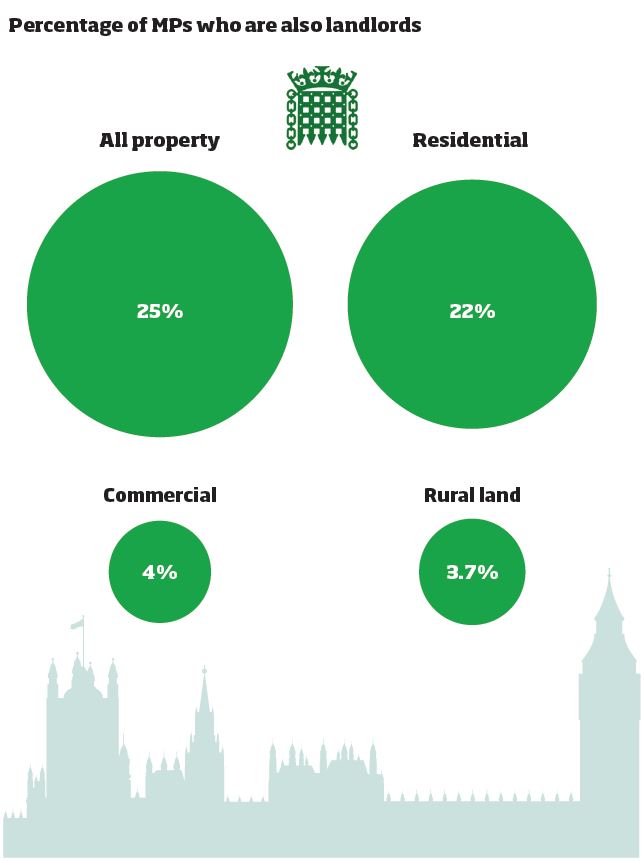