While the newspapers overflow with stories about ‘Britain’s housing crisis’, Argent’s Robert Evans says politicians lack appetite to tackle the problem and public and private sectors must work more collaboratively. 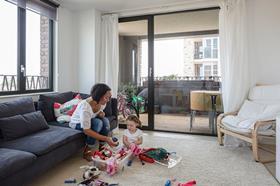 From your experience of managing large regeneration projects, what key things could we do to better address housing delivery?

We could do better by achieving greater alignment and more collaborative working between the private and public sectors. We need to understand and address the serious funding and delivery challenges facing city and local authorities and be innovative in framing joint ventures and effective partnerships, for example to make the best use of their land.

We need a model for municipal partnerships that delivers on the bricks and mortar, yes, but also aligns interests and expertise in employment programmes and training, school and health provision, the public realm and much more.

We need to make significant progress on purpose-built Built to Rent and adopt more radical policies to support it as an asset class and sector.

We also, I believe, need to make better use of the registered provider sector. That sector can draw on significant assets, skills, borrowing capacity and design/delivery expertise. Registered providers are regulated, display the ability to invest for the long-term and have charitable purposes that attract public trust and goodwill. So we have to find a way of enabling house associations to deliver more homes. That might mean offering them a longer term funding settlement and clarifying what is expected of them. It might also mean local authorities and companies like Argent should work more closely with them.

At present, the sector gets mixed messages from the government and regulators. Registered providers have been expected to manage assets carefully, be prudent and collect green traffic lights. On the other hand, there is a national priority to build more homes.

So we need to allow housing associations to make better use of their assets?

Yes. The public purse has helped to pay for those assets so it is right to think about how we can make best use of them. For example, the government-backed Affordable Housing Finance vehicle has recently raised £208m on behalf of six housing associations, at a record low yield. At the same time, however, the surprise budget cut to social housing rents has reduced the underlying value of those assets. Housing association rents will fall by £2.5bn per annum, according to the Institute for Fiscal Studies. Councils similarly are set to lose up to £1bn per annum.

Ultimately, housing delivery is about political will. Housing may be higher on the political and news agenda, not least in London and within the mayoral campaign, but is it a high enough priority in reality?

Politicians are tuned in to all different types of voters, many of whom are sitting on assets they want to continue rising in value. So radical changes to housing delivery will be politically complicated. It may mean, for example, rethinking bits of the green belt, increasing public sector funding and getting local authorities building again, alongside developers and social landlords. It’s difficult to see how the proposed changes to Right to Buy will help housing delivery.

Would it be better for the government to take these decisions now then, before it goes into election mode and has to consider the popularity of such policies?

I’m not a politician, as you can probably tell! However, it seems logical that it would be a good time to pursue difficult policies early on in the parliament because it gets harder later.

Do we need a rethink about where housing is placed within our political structures?

We need to have a long look at where housing sits, not just in terms of government departments but also how we create a sense of national purpose around building more homes. Thereafter, city regions may offer one of the best ways of tackling delivery on a more-than-local basis. Again, is there the political will and consensus to make long-term funding settlements? Politicians say you can’t bind the hand of future parliaments, but the truth is that government does so frequently on topics as diverse as hospital funding, defence and nuclear power.

Perhaps the government should be looking more into municipal bonds then?

Possibly. Certainly they could provide a way of allowing efficient investment at a more aggregate scale so capital is not taking as much of a location risk.

How can you decant some of King’s Cross’ many successful traits and apply them to areas further outside the centre of London with less obvious connectivity and appeal - whether it’s Middlesbrough, Leicester or Tottenham?

There are things that we would like to think are transferable. Long-term thinking, understanding of place, the importance of the public realm, planning skills, mixed use, mixed tenure and stewardship. This is key to how you phase a place: making it attractive in phase one to buy or rent a home and put down roots but also opening up options for phases two, three, four and five.

Success is also about partnership and being a good partner. Working with local authorities and others, building long-term relationships and trust and aligning interests.

Robert Evans is a partner at Argent